cancel confirm NSFW Votes: (0 votes)
Are you the publisher? Claim or contact us about this channel.
0
Showing article 102 of 1658 in channel 13302667
Channel Details:
Viewing all articles
Browse latest Browse all 1658
0
0

The Bahrain Center for Human Rights (BCHR) calls for the urgent intervention in the case of Nafeesa Al-Asfoor who has suspicious breast lumps and suffers from other diseases as well. She is being denied adequate medical care for her condition despite the several attempts of her family with the prison administration for her to receive medical attention.

Nafeesa AlAsfoor got arrested on the 20th of April 2013 with Rihanna AlMousawi after peacefully protesting at the F1 race with t-shirts and slogans that called for the freedom of an imprisoned human rights activist and a photographer. She was reportedly tortured to extract confessions, and was charged under the terrorism law for aiding in an attempt to plant a fake bomb at the F1 race when she was first arrested. She was later charged in the case known as the “February 14th Terrorist Cell” and charged with attempting to overrule the constitution and attempting to overthrow the regime. (Read more: http://bahrainrights.hopto.org/en/node/5729)

According to the family Nafeesa AlAsfoor was checked for suspicious multiple breast lumps in the past which she travelled to Jordan for further treatment for and returned on the 15th of February 2011.  AlAsfoor has informed her family during visits and phone calls after a month of her arrest that she noticed the return of a suspicious breast lump upon self-examination in detention accompanied by pain.

Her husband made appointments for her at Salmaniya Hospital but the detention center refused to transfer her to hospital and has asked him instead to get an approval from the Public Prosecution, which he did through her lawyer. The prison administration continued to refuse to take her to the hospital.  When the appointment passed, the husband repeated the process four times but AlAsfoor was not transferred to the hospital for treatment. It is important to note that AlAsfoor was taken to the Bahrain Defense Force Hospital for checkups, but no treatment was provided nor have they informed her about the results of the checkups.

Another health problem Nafeesa AlAsfoor suffers from is the dislocation of jaw joints which causes a friction between the jaw and head bones, and for which she needs a particular diet. She is also required to wear a TMJ splint that stops her jaw from sliding out of place. Her husband took the splint to the detention center, but they claimed to have lost it. After AlAsfoor lost a considerable amount of weight, the prison administration contacted the husband and asked him to bring her another TMJ splint, which he did. In addition to her jaw problem, AlAsfoor also suffers from severe migraines for which she requires ongoing treatment. 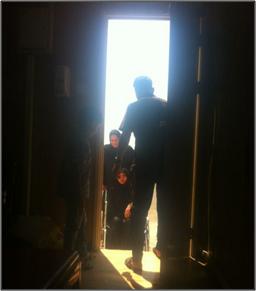 Photo of Nafeesa during detention in a wheelchair

During the last visit, her husband noticed that Nafeesa AlAsfoor had broken her foot as a result of she losing consciousness and falling. She was using walking sticks. It is important to note that AlAsfoor has reportedly lost consciousness many times during detention. A Russian detainee imprisoned for criminal charges, who speaks Arabic, informed the husband during a visit that AlAsfoor had fainted for about 45 minutes before the ambulance transported her to the hospital.

On the 16th of August 2013, the family received a call from AlAsfoor informing them that she is at the Fort Prison Hospital and that that she will stay for a couple of days. The following day the family received news that AlAsfoor was diagnosed with anemia which has been the reason for her loss of consciousness several times during detention, and that she will be held under observation. The family and the Bahrain Center for Human Rights (BCHR) hold the Bahraini authorities responsible for the life of Nafeesa AlAsfoor and her physical and psychological wellbeing.

The BCHR calls on the United States, the United Kingdom, the United Nations, the European Union and all close allies and relevant international institutions to put pressure on the Government of Bahrain to: