cancel confirm NSFW Votes: (0 votes)
Are you the publisher? Claim or contact us about this channel.
0
Showing article 109 of 1658 in channel 13302667
Channel Details:
Viewing all articles
Browse latest Browse all 1658
0
0

The Bahrain Center for Human Rights express grave concern over the escalated level of impunity that has gone as far as detaining the fathers of extra-judicial killing victims who continue to demand justice for their sons.

On 11 August 2013, Ahmed Abbas Mowali was arrested from Arad following to a police attack on a peaceful protest that called for rights and freedoms. On 13 August 2013, the public prosecution ordered the detention of Ahmed for 45 days pending investigation on charges of “illegal gathering”.

Ahmed is the father of Yousif Mowali (23 years old), who was arrested, tortured and then drowned in January 2012.  His mother was told at the Samaheej police station that Yousif was at the Criminal investigation department and that he was fine. A few days later, police said they found Mowali's body floating in the water on January 13th in the Amwaj area. A state doctor reported the cause of death as drowning and ruled out signs of violence. However, a second autopsy performed by an independent forensic pathologist concluded Mowali was electrically tortured and unconscious when he drowned.

The investigation into the death of Mowali has not made any progress, and no one has been held accountable for either his death or torture.

On 22 August 2013, Abdulhadi Mushaima was arrested from his home following a raid by the riot police and security men dressed in civilian clothing during the early hours of the morning. On 24 August 2013, he called his family and informed them that he was given a detention order of 45 days. He was interrogated at the public prosecution in the absence of a lawyer and was charged with “illegal gathering” on the basis of his participation in peaceful protests for rights and freedom. 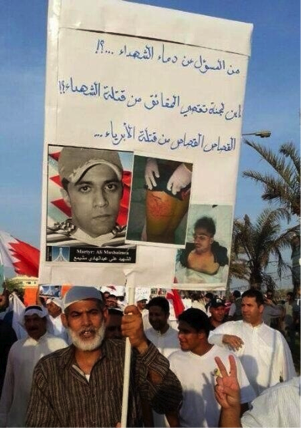 Abdulhadi is the father of the first victim on Feb 14, 2011; Ali Mushaima was killed in front of his own house by police officers firing birdshot. The death of Ali was confirmed in the Bahraini Commission of Inquiry Report (BICI) [Case #1 –start at paragraph 896] which stated that:

“The death of Mr Almeshaima can be attributed to the use of excessive force by police officers. At the time of the shooting, there were no reports of any disturbances in the Daih area. Furthermore, the fact that Mr Almeshaima was shot in the back at close range indicates that there was no justification for the use of lethal force.” 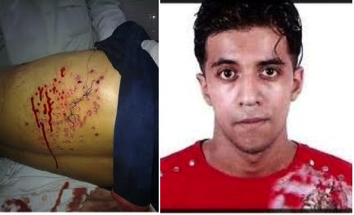 Since his death, the family of Ali Mushaima has been subjected to ongoing attacks by the authorities. The family's home has been attacked more than three times. On 13 January 2012, their home was directly attacked with tear gas after the security forces raided the house by entering the kitchen, where they broke teapots and assaulted the deceased victim’s sister by spitting in her face and shouting at her. From what she recognized the security forces were Yemeni, and they were filming the assault. The officers attempted to beat Ali Mushaima’s father, then they threw tear gas at the entrance of the house, which caused the teargas to spread throughout the house. Ali Mushaima’s aunt was in the home at the time, and the teargas caused the 83 year-old woman to have difficulty breathing, high blood pressure, and an infection in her kidney, all of which she had not suffered from prior to the attack. Although the family attempted to leave the house to escape the toxic gas, the security forces encircled the home and prevented their exit for a period of time.

On 31 January 2013, the 3rd criminal court sentenced one policeman who is accused with “beating that led to death” of Ali Mushaima to 7 years in prison. He was released during the appeal trial and the court will hear his appeal on 16 September 2013.

The Bahrain Center for Human Rights believes that both Ahmed Mowali and Abdulhadi Mushaima were targeted and detained for exercising their basic rights and publicly demanding justice for their killed sons. The BCHR has previously documented several cases of attacks on families of extra-judicial victims that included detention. On 26 October 2012, Jawad Al-Shaikh was arrested from a peaceful protest in Manama that demanded self-determination. Until this day, no has been held accountable for the death of his 14 year-old son Ali Alshaikh who was killed by police with a shot to his neck from behind on 31 August 2011.

These arrests are acts of intimidation directed at all other relatives of killed victims, who continue to accuse the regime with the killing of their sons and continue to participate in peaceful protests to demand justice. This is part of a systematic policy of granting impunity for the violators of human rights as a report by the BCHR has shown: The BCHR Holds the King Responsible for the Spread of the Culture of Impunity which Has Claimed the Lives of Tens of Victims.

Therefore, the Bahrain Center for Human Rights calls for the following:

1. The Bahraini government must release Ahmed Mowali and Abdulhadi Mushaim immediately, as they have been targeted for practicing their legitimate right to peaceful assembly and demanding justice in peaceful ways.

2. Stop the acts of harassments and intimidation directed at the relatives of the victims of the human rights violations who continue to raise awareness about it and demand justice.

3. Those responsible for the killing of civilians must be held accountable and brought to an independent judicial system.

4. Families of extra-judicial killings must be compensated both morally and materially for their losses, as well as for the attacks they have been subjected to.

5. The international community must condemn the Bahraini regime's use of vengeance in the case of the families of victims of extra-judicial killings.