cancel confirm NSFW Votes: (0 votes)
Are you the publisher? Claim or contact us about this channel.
0
Showing article 112 of 1658 in channel 13302667
Channel Details:
Viewing all articles
Browse latest Browse all 1658
0
0

To mark the International Day of the Victims of Enforced Disappearances, the Bahrain Center for Human Rights releases a report detailing a sample of cases of enforced disappearances in Bahrain. In 2011, the Bahrain Independent Commission of Inquiry concluded that "the commission is able to determine that the Government of Bahrain concealed or withheld from detainees and/or their families information about the detained persons' whereabouts for periods ranging from days to weeks". The authorities continue to heavily rely on this illegal practice to terrorize the population.

In a typical enforced disappearance, a family's home is raided in a pre-dawn attack by the security forces, along with men in civilian clothing wearing masks over their faces. A member of the family is abducted by the authorities, and the home is ransacked. The authorities often take electronics and cash, which are never returned. Almost without exception, the family is not presented with an arrest warrant. When the family then tries to contact the abducted individual at the local police station, they are informed that the person is not in their custody, which often later turns out to be false. Detainees are frequently prevented from contacting their family for days, and sometimes weeks. Victims of enforced disappearances have been repeatedly subjected to torture and ill-treatment, interrogated without the presences of a lawyer and coerced into signing false confessions. They are deprived of their most basic rights. 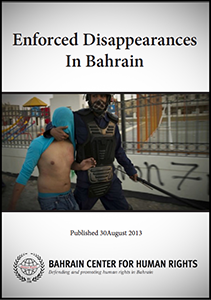 Link to the full report.