The Bahrain Center for Human Rights (BCHR) is gravely concerned about recent attempts by the Bahraini authorities to intimidate human rights defenders in exile in order to prevent them from pursuing their human rights work. Bahraini human rights defenders are receiving threats on social media networks or via messenger networks targeting family members in Bahrain, and relatives are summoned by police for interrogation at the Criminal Investigations Directorate (CID) without an explanation.

Recently, the family of human rights defender Sayed Ahmed Al-Wadaei, director of advocacy at the Bahrain Institute for Human Rights (BIRD), was directly targeted after earlier threats. His brother-in-law and mother-in-law were detained by the authorities. On 2 March at 3:40AM, 18-year-old Nazar Sayed Namaa Al-Wadaei, his brother-in-law, was arrested in Jid Ali, calling his family two hours later from the CID. According to his mother’s testimony to a family relative, her son claimed the authorities tortured him during interrogation. On the same day, police dressed in civilian clothes arrived at the house of Al-Wadaei’s mother-in-law’s, Hajar Mansoor Hasan, around 1PM and summoned her for interrogation at CID. The authorities refused to reveal the grounds for the summons. On 8 March 2017, Mansoor was presented to the public prosecution which has order to keep her in detention for another 30 days pending investigation. The charges against her are not clear yet.

Sayed Ahmed Al-Wedaei is a victim of reprisals by the Bahraini authorities, as his citizenship was revoked in February 2015 due to his human rights work and he continues to live in exile.

In October 2016, his wife Duaa Al-Wadaei, was prevented from travelling, then briefly detained along with their 18-month-old baby, while being questioned about her husband’s activity, and mistreated at the Bahrain airport.

These renewed reprisals actions come as part of an ongoing reprisal and threats campaign targeting human rights defenders both directly, and indirectly, through their family members to stop their activism. 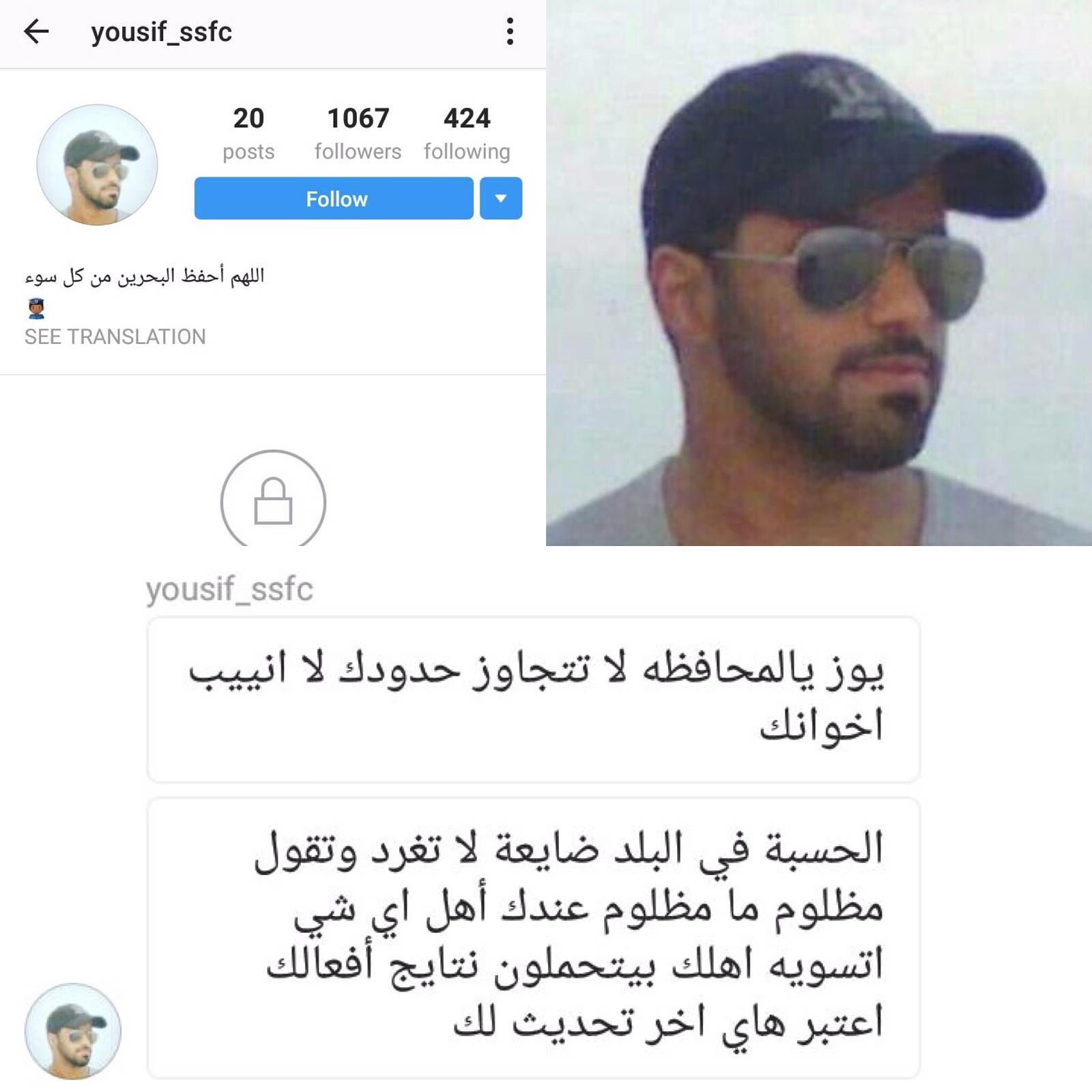 On 14 February 2017, Said Yousif Al-Muhafdha, Vice President of BCHR, received threatening  messages through the photo social network Instagram, from the user account “yousif_ssfc,” who is believed to be Yousif Al-Manaai, a member of the National Security Agency in Bahrain. In the message, Al-Manaai threatens Al-Muhafdha by saying that  he should not “cross his borders” or else his brothers will be targeted. He adds that “there is no accountability” and call Al-Muhafdha to stop tweeting, as “whatever you do, your family will bear the cost.” Al-Muhafdha has been forced to live in exile since October 2013, after being a target of arbitrary arrests and prosecution for his human rights work in Bahrain.

Three days ago, on 7 March 2017, Al-Muhafdha received an anonymous message via Whatsapp from a person claiming to belong to a Bahraini government body which threatened his family in Bahrain.

Said Yousif Al-Muhafdha says: “This is an attempt by the Bahraini government to intimidate human rights activists. They are targeting our families to silence us!”

The implementation of such threats of reprisals against relatives of activists is not a recent practice in Bahrain.

Rajab has been kept in pre-trial detention since 13 June 2016, when he was arrested for “spreading false news and rumours about the internal situation in a bid to discredit Bahrain” during televised interviews with international news agencies and for tweets criticizing the war in Yemen and torture practices in Bahraini Jau Prison. Rajab was subsequently charged for articles published in the New York Times and Le Monde. He was released on bail in one case on 28 December but was immediately arrested in another. He is detained for over 260 days now, awaiting trial on 22 March in relation to his tweets, and again on 16 April, in relation to his televised statements.

BCHR calls on the government of Bahrain to:

BCHR calls on the international community to: