cancel confirm NSFW Votes: (0 votes)
Are you the publisher? Claim or contact us about this channel.
0
Showing article 133 of 1658 in channel 13302667
Channel Details:
Viewing all articles
Browse latest Browse all 1658
0
0

The Bahrain Center for Human Rights condemns the continued attacks on the families of political dissidents, and the targeting of their relatives and children with arrests and trials as part of harassment campaign. The family of AlMoqdad has had eight of its members arrested so far, which started with the arrest of 2 prominent political leaders in 2011, and the last victims who are 15 and 16 year old boys arrested several days ago. A ninth member of the family is also on trial.

Jaffar Abduljalil AlMoqdad (15 years old) and his cousin Mohamed Ebrahim AlMoqdad(16 years old) along with seven other children and six adults were abducted by security men in civilian clothing accompanied by police vehicles at around 4am on the 5th of September 2013 from a swimming pool in Adari village.  A worker at the swimming pool witnessed the beating of the detainees at time of arrest, as they were taken away in their swimwear.

Despite inquiring about them in several police stations in the morning, their families were not able to get any information about the children’s whereabouts or wellbeing. It took over 48 hours to get to know that the two children from the AlMoqdad were moved to the Dry Docks detention center (adult’s prison).

The lawyer of Jaffar said that the public prosecution interrogated him in absence of his lawyer despite being informed of the lawyers contact. The prosecutor ordered the detention under interrogation of all the detainees, including Jaffar and the other children, for 60 days under the terrorism law.

On the 9th of September, Jaffar called his family to inform them that he is at the Dry Docks detention center (adult’s prison) and he has a visit the next day. He briefly informed them that he was subjected to torture and he said he would give the details during the visit. He also informed them that he was forced to confess and to sign papers at the public prosecution without being able to read it. However, when the family went to visit him on the 10th of September, they were denied the visit without any explanation.

Other young children have been tried under the terrorism law, the youngest child being Hussain AlDallal, 14 years old.

Murtadha AbdulJalil AlMoqdad, who is currently pending a verdict that could include imprisonment for “illegal gathering” said that the authorities are refusing to return the passport documents of the family, which were taken by the security forces at time of arresting his father in March 2011. Without passports the family members cannot travel or apply for jobs. 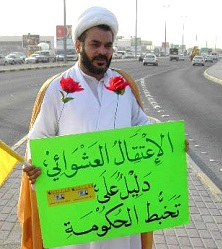 Bahraini-Swedish citizen Sheikh Mohammed Habib Al-Moqdad, 50 years old, is an outspoken cleric and independent opposition activist who has been in detention since the 1st  of April 2011. He was tried in a military court and he is currently serving 68 years prison sentence in 12 cases[1] ranging between the charges of "inciting and seeking to overthrow the regime" and "incitement to the formation of gangs to attack foreigners or to kidnap security officers." He is also accused in the same case of the 13 human rights and political leaders known as the Bahrain13 serving sentences for “plotting to overthrow the regime[2]”.  He was subjected to psychological, sexual and physical torture following his arrest. During his testimony to the court of appeal on the 19th of June 2012, he told the court the names of six officials responsible for torturing him in custody, including the King’s son, Nasser Bin Hamad Alkhalifa.[3] 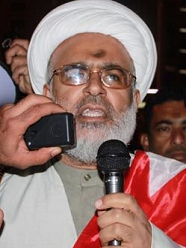 Sheikh Abdul Jalil Al Moqdad , an outspoken cleric and a political leader in the Alwafa opposition movement,  has been in detention since the 27th of March 2011. He was tried in a military court and is currently serving a 30 year prison sentences in multiple cases including a life sentence in the case of the 13 human rights and political leaders known as the Bahrain13 charged with “plotting to overthrow the regime[4]”.  He has been subjected to severe torture in detention and was beaten to force him to apologize on tape.[5] He is currently denied treatment for the pain in his back which he suffered from a slipped disc due to torture. 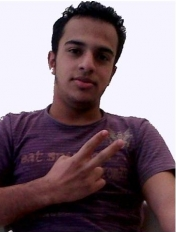 Mustafa Al Moqdad, 17 years old, is the son of the political leader Sheikh Abdul Jalil Al Moqdad.  He was arrested on the 19th of May 2011 after a house raid at dawn. He was reportedly tortured for two weeks after his arrest. According to the testimony, he was beaten with a plastic cable, deprived from sleep for three days and was forced to stand for days. Mustafa was not allowed access to his family or legal representation until his first court hearing on the 21st of June 2011 at the military court. In October 2011, he was sentenced to 15 years imprisonment at the National Safety court (vis-à-vis the Military court) which was later reduced to three years (Read: www.bahrainrights.org/en/node/4845). On the 14th of May 2013, Mustafa was subjected to additional torture at the hands of prison guards at Jaw prison (adult prison)[6]. Mustafa was an academically excellent student who has now been deprived from his studies because of his imprisonment on trumped up charges and due to bad prison conditions. Mustafa is currently suffering from difficulties in breathing and is denied the medical treatment he needs. 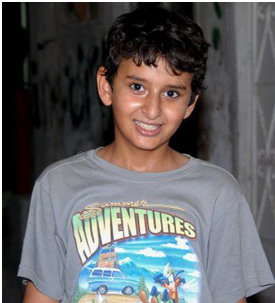 Ebrahim Ahmed Al-Moqdad, was arrested when he was 16 on the 23rd of July 2012 during an anti-government protest in Bilad al-Qadeem. For nearly 48 hours after his arrest, he was not allowed to speak to his family and there was no lawyer present during his interrogation. Ebrahim told his family that he was beaten after his arrest, and that the policemen tried to get his clothes off to sexually assault him but he resisted. A gun was pointed at him and to further intimidate him, police put a gun parallel to his ear and pulled the trigger. He said that he was then taken to a burnt armoured vehicle where he was given a script and videotaped confessing to burning it. He was interrogated by infamous torturer, Isa Al Majali, who verbally abused him. He was blindfolded at all times, handcuffed and was made to lay on the ground and not allowed to move, sit or sleep[7].  On the 4th of April 2013 he was sentenced to 10 years in prison after being tried under the internationally criticized terrorism law on the charge of “burning an armored vehicle”. He is currently serving the sentence at Jaw prison (adults prison) where the prison authority had to make special uniforms to fit him because there were none available in his size.[8] 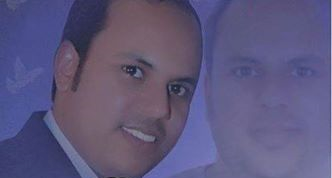 Brother of political leader Sheikh Abdul Jalil Al Moqdad, has been in detention since the 27th of March 2011. He has been on trial at a military court along with his cousin the political leader Mohamed Habib AlMoqdad and the child Mustafa AlMoqdad for allegedly kidnapping and detaining a policeman in March 2011. He was sentenced to 15 years in prison. He was reportedly subjected to torture including electrical shocks and beatings with a plastic hose. 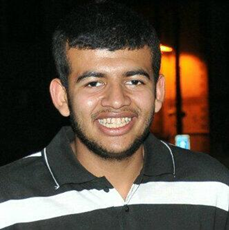 Hussain AlMoqdad has been in detention since the 6th of July 2012. He was reportedly subjected to torture to obtain confessions. He is currently serving a prison sentence of 10 years for allegedly blowing up a gas cylinder. 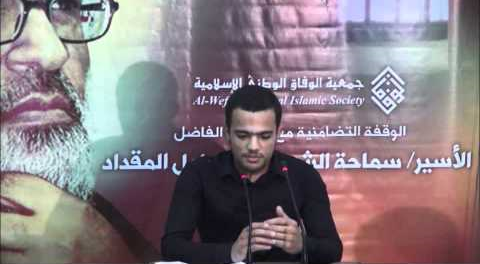 Murtadha AlMoqdad, the other son of the political leader Abdul Jalil AlMoqdad has been arrested several times between 2011 to date and has been detained for several months. He is currently out of prison on bail while still on trial for multiple “illegal gathering” charges. He is expecting a verdict on the 18th of November 2013 and he may face a prison sentence. He is actively speaking up about the attacks on his family members and using social media outlets[9] to spread the word about the violations to their rights. AlMoqdad believes his trial is a form of retribution for his peaceful activism for rights and democracy.

The Bahrain Center for Human Rights believes the family of AlMoqdad has been targeted in revenge for the political activism of the two leaders who were detained in 2011, Sheikh Abdul Jalil Al Moqdad and Sheikh Mohamed Habib AlMoqdad, as well as for the continued peaceful activities of the family members to demand freedom and justice for their detained relatives.

Bahrain Center for Human Rights calls on the close allies, namely the United States and the United Kingdom, as well as relevant international institutions like the United Nations to pressure the Bahrain Government to:

- Compensated all those subjected to harassment and/or torture.

- To cease all harassment and targeting of all political and human rights activists and their families.

- To release all political prisoners unconditionally, and provide full access to rights of free speech and peaceful assembly as guaranteed by international conventions.