On 20 June 2016, the Ministry of Interior (MOI) revoked the citizenship of a top Shia Muslim Leader, Sheikh Isa Qasim. Sheikh Qasim is the religious leader of the Shia Muslim community, and has been a leading figure in the introduction of democratic reform in Bahrain since the 1970s. Sheikh Qasim was sentenced on 21 May 2017 to one year in prison, suspended for three years, and ordered to pay a fine of 100,000 BHD on charges of alleged money laundering.

The MOI cited Article 10(c) of the Bahraini Nationality Law to justify its decision to revoke his citizenship. The law states that citizenship can be revoked if individuals “cause damage to the interest of the state or take action contrary to duty or loyalty to it.” The MOI further accused Sheikh Qasim of having “exploited the religious pulpit for political purposes.” The decision of the MOI to arbitrarily revoke the citizenship of the leading Shia cleric resulted in thousands of supporters spontaneously gathering in front of his house in Duraz in solidarity and in protest of the decision. The gathering turned into a sit-in towards the end of June 2016 and after people vowed not to leave the area, has continued for a whole year. 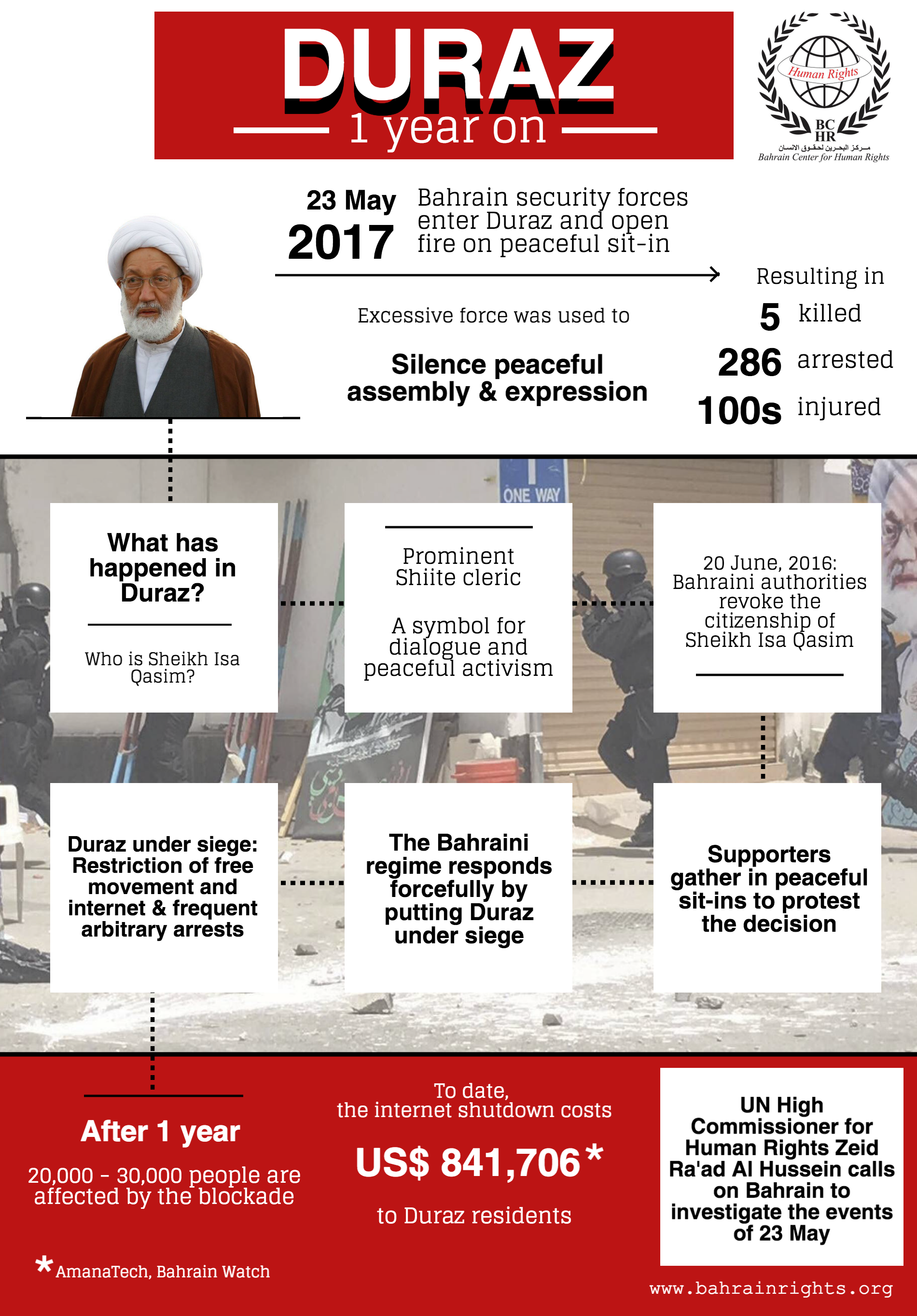 Since the outset of the protests, Bahraini security forces have responded harshly. Arrests were made from the start, and countless individuals have been charged with illegally gathering in Duraz, in violation of their rights to freedom of assembly and expression. The authorities have made numerous attempts to limit participation in the protests in Duraz, have limited access to the town, and have employed deterrent methods such as issuing summons, and arresting individuals who take part in protests - or even who visit the area.

In July 2016,  police established blockades closing most roads into and out of Duraz, all major and minor entrances have therefore been sealed off. Other entrances and exits were blocked with concrete slabs, sandbags, police cars, and barbed wire. Only two entrances were left open, and people were queueing to enter and exit the town. Checkpoints were controlled by various security personnel. Restrictions on free movement were intensified during Eid Al Fitr in July 2016; the celebration at the end of Ramadan, families were unable to visit relatives, and many were unable to participate in celebrations. Usually busy sites during Eid, such as Abu Subh beach, were virtually empty. The blockades have also had a social impact; clerics are not allowed to enter the area, affecting Friday prayers, and family members are not allowed to enter. Schools have also been affected, the school bus is not allowed to enter Duraz without authorisation by the MOI. This has resulted in children having to walk long distances to school.

Since 23 June 2016, all major Internet Service Providers (ISPs), including the three largest, Batelco, Zain, and Viva, have enforced a daily Internet shutdown, most probably as a result of a device restriction order from the authorities. By limiting access to the Internet, e-commerce traders, IT professionals, and office workers are prevented from working effectively. Card payment machines have also been rendered useless during the shutdown, economically impacting businesses in the Duraz area. On 1 July 2016, the United Nations Human Rights Council passed a new resolution for the protection of freedoms on the Internet which “condemns unequivocally measures to intentionally prevent or disrupt access to or dissemination of information online in violation of international human rights law and call on states to refrain from and cease such measures.”

Despite these increasingly harsh tactics protesters have continued to show their support to Sheikh Qasim.

On 26 January 2017, Bahraini security forces fired live ammunition at protesters in Duraz. It is unclear what branch the security officials involved in this attack operate. The Bahrain Institute for Rights and Democracy (BIRD) reported that the type of ammunition recovered from the area was consistent with the types of ammunition used by Bahrain’s riot police. During the attack several people were reported injured. Mustafa Ahmed Hamdan, aged 18, was shot in the head, and was taken to Salmaniya Medical Complex to receive emergency medical treatment. Hamdan died on 24 March, two months after the incident. He had been comatose since the shooting and suffered from numerous injuries including a skull fracture, concussion and internal bleeding. The Bahraini government failed to release any publicly available information on Hamdan’s shooting. The security forces were not made to accept responsibility, and no public investigation has taken place. Bahrain’s National Institute for Human Rights (NIHR) issued a statement on 30 January acknowledging Hamdan had suffered a head injury, but blamed the incident on “two groups of masked men exchanging rockets and fires shooting.”

Ahead of Bahrain’s Universal Periodic Review (UPR) by the United Nations in May 2017, 32 people were summoned for questioning by the Public Prosecution. As many as 24 of these individuals were charged with “illegal gathering in Duraz.” The majority of those charged are not residents of Duraz, and non-residents have been prevented from entering the town since 20 June 2016. The charges appear to have been used to stop them, and act as a deterrent to others, from criticising Bahrain during its UPR. Eight of those charged were told that they had been placed under a travel ban, and were therefore unable to leave the country. 19 of those summoned were human rights activists, others were journalists, members of the political opposition, and bloggers.  The protest in Duraz is being utilised by the Bahraini authorities as a ‘go-to’ charge for individuals who engage in civil society and human rights mechanisms, and prevented human rights activists from participating in the UPR.

One year on from the revocation of Sheikh Qasim’s citizenship protesters continue to gather in Duraz in support of the cleric, and the Bahraini government still maintains a heavy security presence.

Violent attacks in May 2017

In May 2017, two days after United States President Donald Trump said international relations between Bahrain and the US were set to improve, and following the sentencing of Sheikh Isa Qasim, the government of Bahrain escalated its campaign in the besieged village of Duraz.

On 23 May 2017, national security forces, including members of the special forces, entered Duraz and opened fire on the peaceful sit-in supporting Sheikh Qasim. The Bahraini Ministry of Interior has confirmed that five individuals were killed; reports also indicate that dozens of people were injured with bird shot pellets. Internet access was shut down during the raid on Duraz by security forces, effectively preventing individuals from easily disseminating information using social media platforms. On 25 May, it was reported that security forces remained in Duraz, and that house raids were still ongoing; the house of Sheikh Isa Qasim remains surrounded by police officers. According to information received from Qasim’s family members, residents of the house were prevented from accessing water. Individuals were being denied access to the town. There are also reports that many individuals have disappeared, and that family members are unaware of their whereabouts. In one case, a woman called her husband, and was told by the woman that answered that she had found mobile phones thrown on the streets.

The families of those who were killed were taken to Budaiya police station, one member of each family was called in, had their mobile phone removed, and was asked to identify the victims. The five men were subsequently denied funeral rites, and buried in secret on 28 May, without the presence or consent of family members. The deceased have been named as Mohammed Al-Ekri, Mohammed Hamdan, Mohammed Alsari, Mohammed Zain Eldin and Ahmed Al-Asfoor. 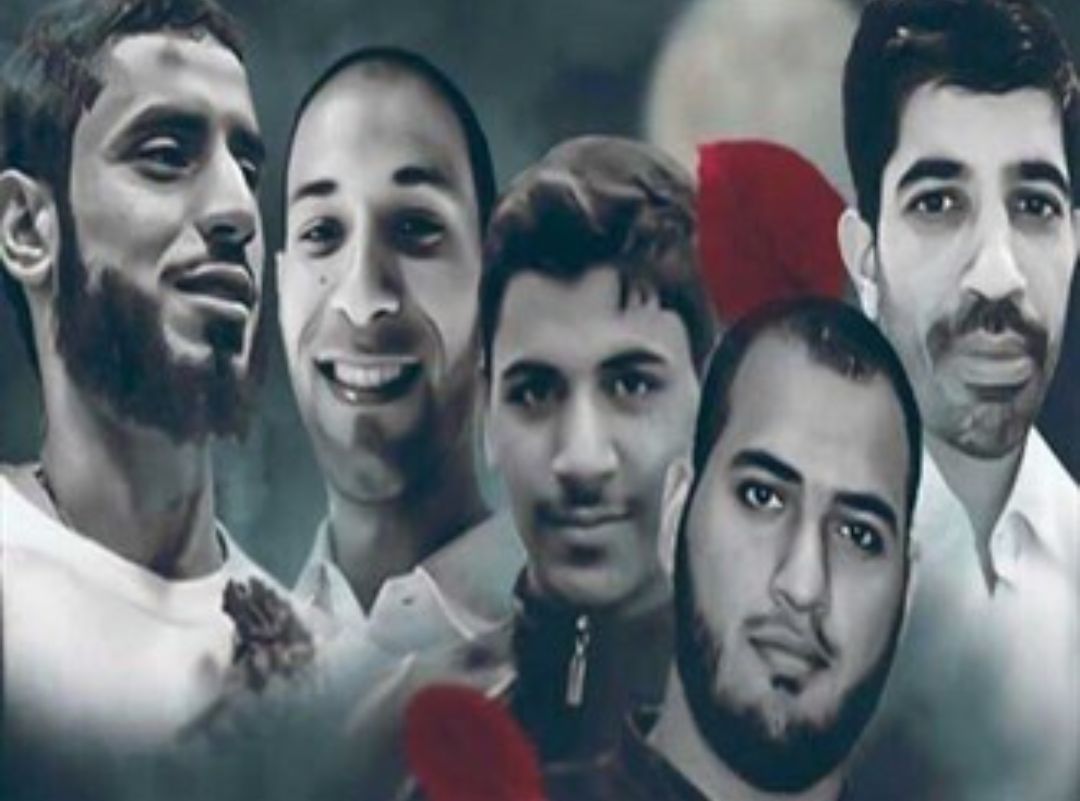 It is is believed that one of the victims, Ahmed Jameel Alasfoor, died from injuries sustained after his arrest. Mohamed Hasan Hamdan is the brother of Mustafa Hamdan, also killed in Duraz earlier this year.

The effect of this incident has been wide ranging; prisoners detained in Jau prison have been allegedly subjected to reprisals. Detainees have been stripped of their clothes, and subjected to beatings. All calls from inmates to their families have been stopped. Additionally, woman human rights defender Ebtisam Al-Sayegh was summoned to the National Security Agency  (NSA) and interrogated for seven hours without her lawyer being present. During the interrogation, Al-Sayegh reported being verbally abused and sexually assaulted. Following her release, Al-Sayegh was admitted to hospital, suffering from a nervous breakdown.  Other human rights activists who wish to remain anonymous have also reported being summoned to the NSA and interrogated in recent days. Those summoned were documenting and monitoring violations on the ground in Duraz

On 2 June, the UN High Commissioner for Human Rights Zeid Ra’ad Al Hussein called on the Government of Bahrain to launch an independent and effective investigation into the deaths of five protesters during the operation in Duraz. Zeid urged “the government to investigate the events of 23 May, in particular the loss of lives, to ensure that the findings are made public and that those responsible are held accountable.” He also called on the authorities to release any individuals being detained for peacefully exercising their rights to freedom of expression and assembly.