cancel confirm NSFW Votes: (0 votes)
Are you the publisher? Claim or contact us about this channel.
0
Showing article 147 of 1658 in channel 13302667
Channel Details:
Viewing all articles
Browse latest Browse all 1658
0
0

Since the beginning of the Islamic month of Muharram, security forces have led provocative attacks on several Shia Muslim neighborhoods in Bahrain. Pictures and videos show them taking down religious flags and banners that were placed earlier on homes and religious centers and in the neighbourhoods as part of the annual season for Shia Muslims commemorating the “martyrdom of Imam Hussain”, the grandson of the Prophet Mohammed.

On 4 Nov 2013, riot police attacked a group of people participating in a religious procession in Maameer, which have taken place in Bahrain for decades. The riot police used excessive tear gas against dozens of people that included elderly citizens and children. People of all ages participate in these processions given that they do not expect to be attacked as they are not political protests.

On 7 Nov 2013, riot police stormed a religious center “Matam” in Aali without presenting any warrant. On the same day, security forces took down flags and destroyed religious banners in Tubli and Sanad.

On 8 Nov 2013, riot police fired tear gas in Nuwaidrat on people who tried to stop the security forces from taking down the religious banners in their neighborhood. 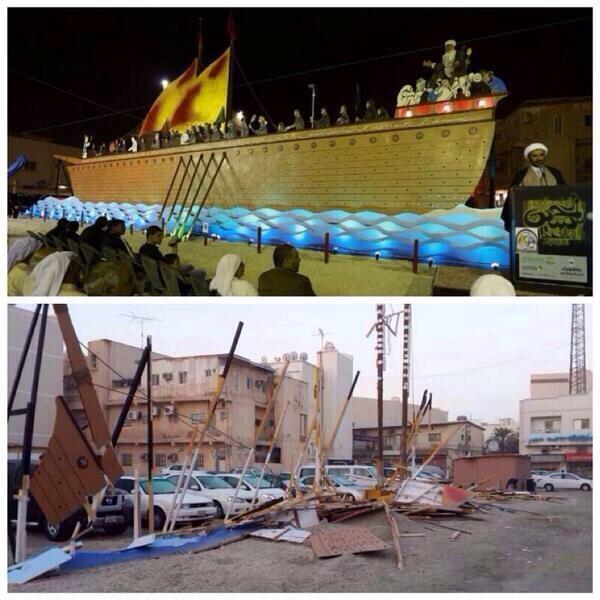 At dawn on 13 November 2013, the security forces, working together with a civilian team using heavy machinery, destroyed an artistic representation of a ship entitle “Imam Hussain, the survival ship”, which was made of wood. The piece was placed in the neighborhood of Juffair before the start of the religious days of Muharram, as part of annual art projects in the neighborhood. These traditional art instillations were never attacked prior to 2011 when a mass attack on religious places and religious representations was conducted by the authorities. The municipality’s representative of the area, Hussain Qarqoor, confirmed that the municipality (which is the relavent authority for removing or installing such displays) was not aware of the action taken by the security forces.

The destruction of the art display escalated to the point of confrontation between some of the citizens and the police and tear gas was fired until 9:00 in the morning leading to the suffocation of several people in the area, including those at their own residences.

On 14 November 2013, which is the 10th day of Muharram, a religious procession carrying photos of imprisoned political leaders was attacked at noon in Nuwaidrat village with extensive amounts of tear gas, sonic bombs and shotguns which caused several injuries among those present. 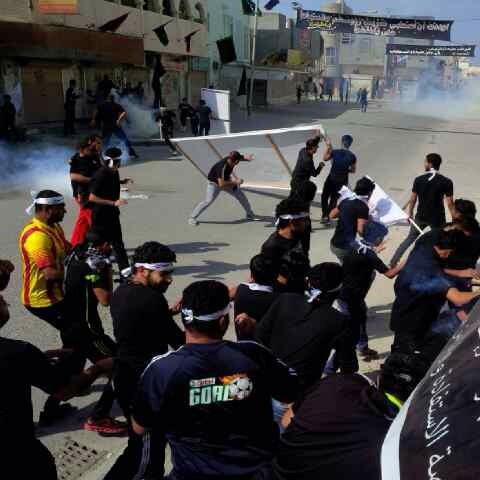 Furthermore, several citizens received police summons without a name specified on the summon, stating only “for the house’s owner”, due to placing Ashoura flags or banners on their own homes.

Additionally, the Government of Bahrain blocked a website which does live broadcasts of the religious events of Ashoura from over 30 areas in Bahrain http://matam.tv

The BCHR and BYSHR regard the above mentioned targeting and attacks as violations of freedom of religion, freedom of expression, and a practice of discrimination against Shia’s with the intent to further cause a sectarian split in the society and push towards to sectarian violence.

These practices are not new and the BCHR had documented similar attacks in the past (Nov 2012 report http://www.bahrainrights.org/en/node/5502), however due to the culture of impunity, and the policy of discrimination, the harassment against Shia Muslims continues through judicial means.

The BCHR and BYSHR respectfully reminds the Government of Bahrain of Article 18 of the Universal Declaration for Human Rights: "Everyone has the right to freedom of thought, conscience and religion".

Maryam Al-Khawaja, the Acting President of the Bahrain Center for Human Rights, said: “All sects and religions must be respected in Bahrain; that includes religious events. The Government of Bahrain is trying to purposely instigate a violent response from Shia Muslims by targeting them during an important religious period; and we have previously warned of the consequences of pushing people towards sectarian animosity. Allies of the Government of Bahrain must apply pressure for the immediate halting of sectarian based targeting; and promote respect for all religions and sects equally.”

The Bahrain Center for Human Rights calls on the United States, the United Kingdom, the United Nations and other allies and international institutions to pressure the Bahraini authorities to:

3. Immediately investigate and hold accountable those who gave orders, overlooked and/or carried out attacks on religious liberties.

4. Guarantee freedom of religion to all religions and sects in Bahrain.