The first six months of 2017 have seen increasing instances of intimidation and reprisals against human rights defenders, journalists, and active members of civil society in Bahrain. Amid the heightened crackdown on critical voices the Bahraini government has regressed to a near total suppression of human rights. The Bahrain Center for Human (BCHR) has documented increased numbers of individuals arbitrarily arrested, an increased number of protests, a significant number of citizenship revocation orders, and the end of an unofficial moratorium on the death penalty. All major opposition parties have now been dissolved, and stripped of their assets. Peaceful protesters have died from injuries sustained at the hands of security forces, and many have been injured by the security forces’ use of birdshot pellets and tear gas.

BCHR is gravely concerned about these recent developments in Bahrain, and the ongoing and increasingly severe and volatile crackdown on human rights defenders, members of the political opposition, journalists, and active members of civil society in the country.

Between 1 January and 30 June 2017 BCHR has recorded a total of 982 arbitrary arrests in Bahrain. Of these 84 were children, and 28 were women. During a raid on the town of Duraz by Bahraini security forces a total of 286 individuals were arrested from the area on two days in May alone. 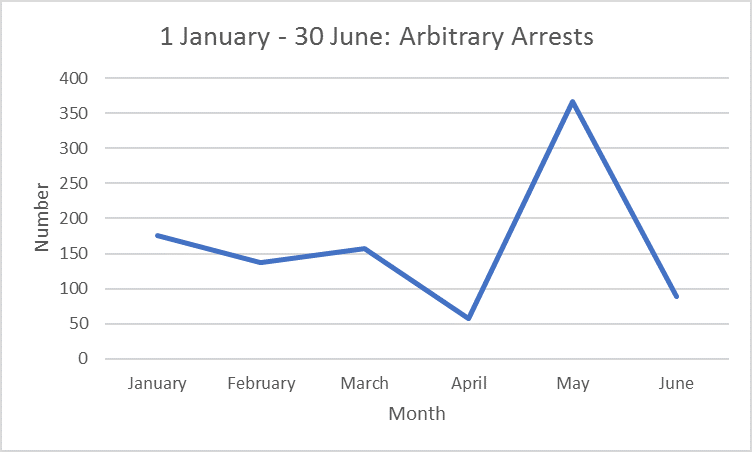 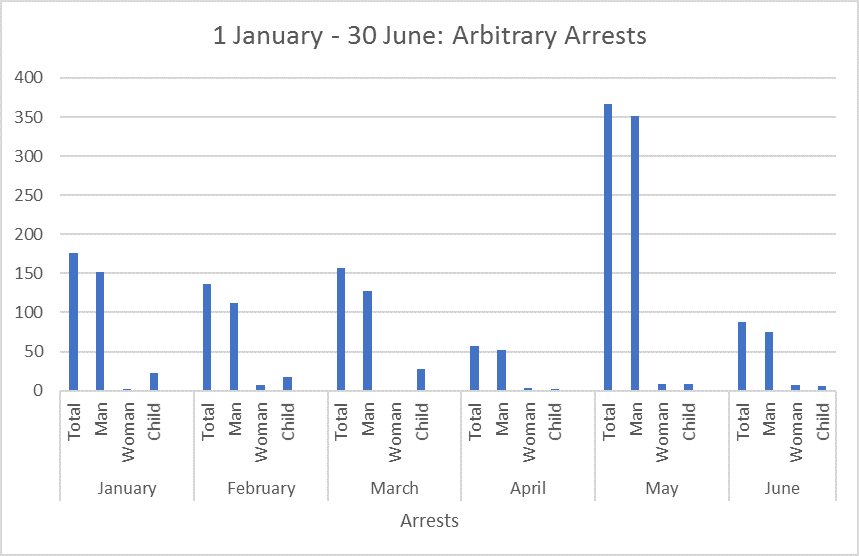 In this time there have been 2,373 protests across the country; 628 of these were suppressed by riot police. Numerous injuries were also reported during this time; injuries caused by birdshot pellets were the most common. A small number of individuals sustained injuries caused by the excessive deployment of tear gas by security forces.

Between 1 January  and 21 May BCHR recorded a total of 772 individuals sentenced in 187 politically motivated cases. Of these individuals, 92 had their Bahraini citizenship revoked, rendering them stateless, whilst 59 life sentences were handed down. 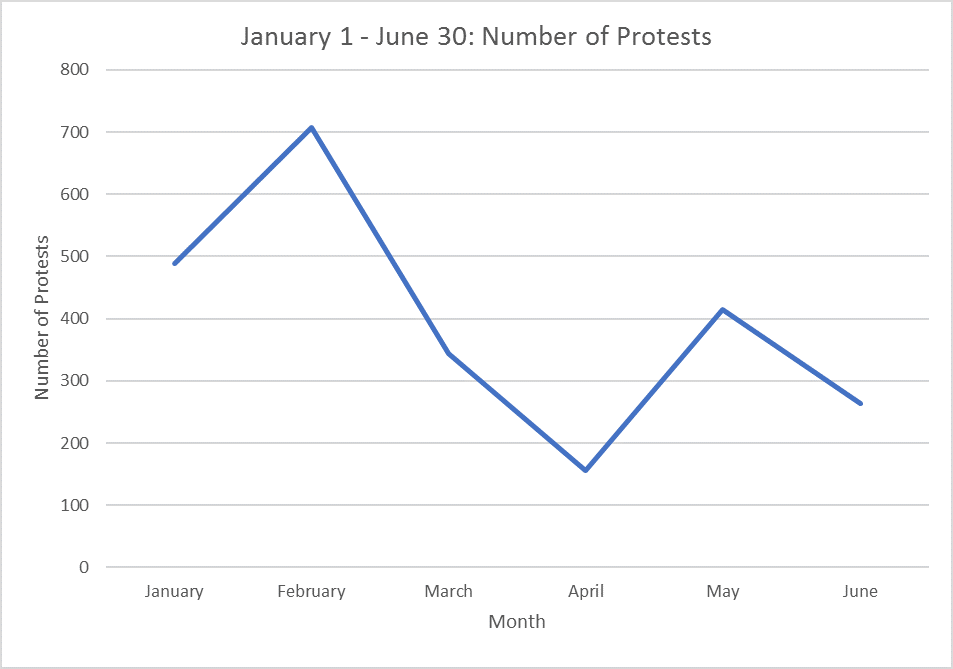 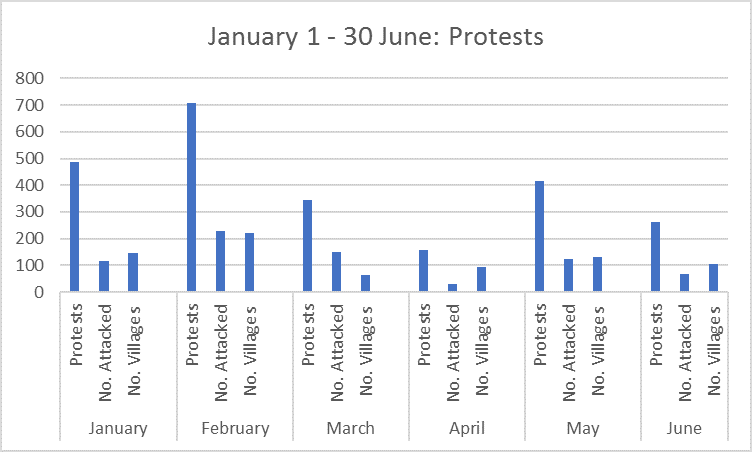 End of the de facto moratorium on death penalty

BCHR remains particularly concerned about the use of the death penalty in Bahrain.

On 15 January, Bahrain ended an unofficial moratorium on the death penalty by executing three alleged torture victims, Sami Mushaima, Abbas Al-Samea, and Ali Abdulshaheed Al-Singace. The three men were executed by firing squad after their death sentence was approved by the King of Bahrain. The sentences were carried out amid credible allegations of torture, and coerced confessions. All three men were coerced into providing false confessions to a bomb attack that had killed three security officers and their trials severely violated due process regulations. A UN expert described the executions as extrajudicial killings.

Mohammed Ramadan and Husain Ali Moosa are both at imminent risk of execution. They were sentenced to death in December 2014 for their alleged involved in an explosion in Al-Dair on 14 February 2014 that resulted in the death of a policeman. Their death sentence was upheld on 16 November 2015 by the Bahraini Court of Cassation, and their execution is pending King Hamad’s approval. Their death sentence comes amid allegations of torture and ill-treatment. 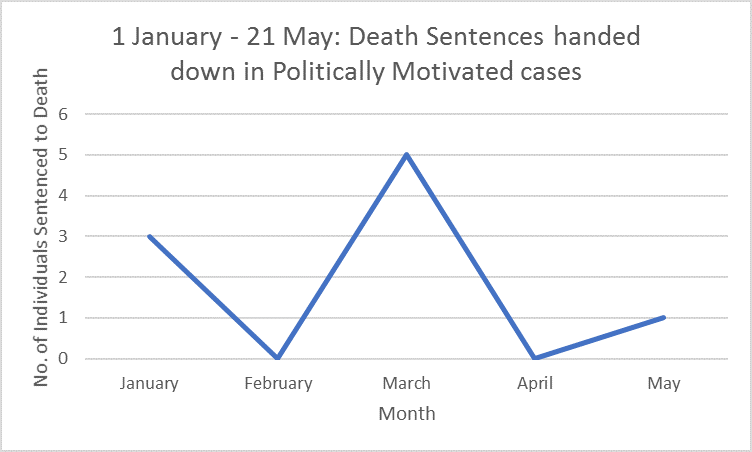 On 8 June, Bahraini courts sentenced a further two alleged torture victims to death. The death sentences were handed down amid grave concerns that the judiciary failed to uphold their rights to a fair trial and follow due process. Sayed Ahmed Al-Abbar (21) and Husain Ali Mohamed (20) were allegedly coerced into signing prepared confessions which then formed the basis of the evidence against them. Al-Abbar and Mohamed were tried alongside 11 other defendants; however, they were the only two to receive the death sentence.

Since January 2017 a total of 9 individuals have been sentenced to death in Bahrain. 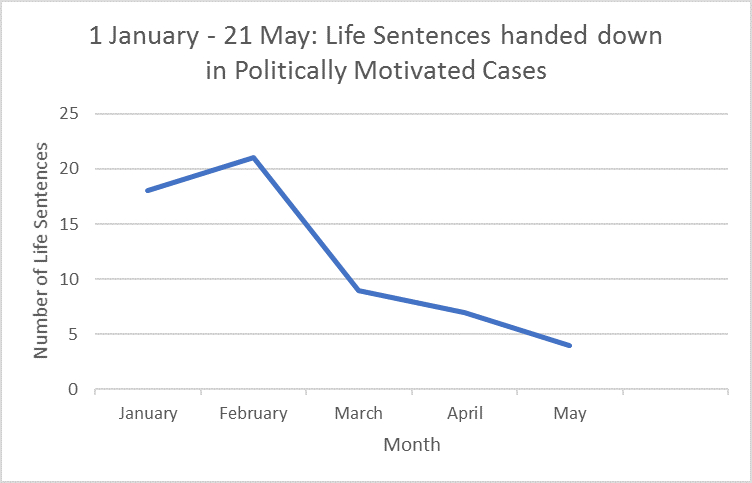 The resumed use of the death penalty was the subject of many of the 175 recommendations made to Bahrain by the UN Human Rights Council during Bahrain’s Universal Periodic Review (UPR) on 1 May 2017. Many countries recommended that Bahrain move towards the abolition of the death penalty and impose an official moratorium on the death penalty.  Other recommendations made during Bahrain’s UPR were related to freedom of association and the protection of human rights defenders, as well as the use of military courts and the country’s broad ranging anti-terrorism laws.

Ireland recommended that Bahrain take urgent steps to facilitate the work of civil society and human rights defenders, and to guarantee the protection of all persons from intimidation or reprisals for seeking to cooperate with the UN. Denmark called for the release of all arbitrarily detained persons including Danish-Bahraini citizen Abdulhadi Al-Khawaja.

The use of military courts in Bahrain was seen as particularly shocking and many countries, including the Netherlands called for Bahrain to rescind law 105b, which allows for civilians to be prosecuted in military courts if accused of crimes under the terrorism laws. The Czech Republic went further and recommended that Bahrain review the anti-terrorism law and its implementation to ensure that it could not be abused and utilised to abuse, harass, and detain dissenters. Only a couple of days after these recommendations were made, on 9 May, the Bahraini authorities referred a civilian to trial before military courts for the first time since 2011. The Office of the Public Prosecution referred the case of Fadhel Sayed Abbas Hasan Radhi, a victim of enforced disappearance to the military courts.

BCHR has also continued to monitor events in Duraz, and is concerned about the deterioration of the security situation in recent weeks.

On 21 May, a suspended sentence was handed down to Sheikh Isa Qasim, after the Bahraini government charged the leading Shiite cleric with allegedly collecting funds illegally and money laundering. Following his sentencing, on 23 May the peaceful sit-in in Duraz which had started in June 2016 was attacked by security forces. Early in the morning national security forces, including members of the Bahraini special forces, entered Duraz and opened fire on a peaceful sit in. The raid occurred just two days after United States President Donald Trump met with Bahrain’s King and said relations between the US and Bahrain were set to improve.

Birdshot pellets were fired by security forces at protesters, resulting in the death of five individuals. Those killed were Mohamed Al-Ekri, Mohamed Alsari, Ahmed Jameel Alasfoor, Mohamed Hasan Hamdan and Mohammed Zain Eldin.  One member of each of the families of those who died was called in to Budaiya police station, where their mobile phones were confiscated, and they were asked to identify the bodies. On 28 May, the men were buried in secret and denied normal funeral rites, without the consent or the participation of their families.The violence levied at protesters in Duraz was accompanied by reprisals against prisoners in Jau prison, who were reportedly stripped of their clothes and subjected to beatings. Activists, journalists and human rights defenders were also called in for questioning and subjected to alleged acts of torture, and forced to renounce their human rights work publicly on social media sites. Woman human rights defender Ebtisam AlSayegh was interrogated for seven hours without a lawyer being present, and after her release from Muharraq police station, she collapsed and was taken to hospital for emergency treatment as result of the physical and psychological torture she allegedly suffered.

The violence in Duraz was followed by further suppression of freedom of association and expression when Bahrain’s High Civil Court ordered the dissolution of the National Democratic Action Society (Wa’ad), the last major opposition group. The forcible dissolution of Wa’ad on 31 May effectively curtailed political opposition in the country. Wa’ad was dissolved and stripped of its assets after the Ministry of Justice and Islamic Affairs (MOJ) accused Wa’ad of breaching the law on political association, and accused the organisation of “advocating violence, supporting terrorism and incitement to encourage crimes.” There was no evidence to substantiate these claims. The closure of Wa’ad comes after the closure of political society Al-Wefaq in July 2016, and further demonstrates that Bahrain continues its crackdown on freedom of association and expression. The lack of any credible political opposition in Bahrain restricts democracy in the country, and reduces avenues for criticism in the country, and can be seen as a move towards total suppression of freedom of expression and association in the country.

The increased use of indiscriminate violence against critical voices in the country, and the targeted reprisals levied at human rights defenders and their families is demonstrative of the escalated campaign in Bahrain.

It is a key moment to press for the end of the systematic clampdown on freedom of expression in Bahrain. The international community should insist on lifting restrictions on freedom of speech and expression. It is pointless to talk about reforms and rule of law as long as exercising fundamental rights cannot be enforced and can result in your imprisonment. BCHR calls on Bahrain’s international partners to seize every opportunity to raise strong concern about the plight of civil society in Bahrain and call on the Government  to take concrete steps to foster an environment in which civil society can operate freely, in accordance with international standards, and in response to recent recommendations from Bahrain’s UPR, as well as from the UN Committee Against Torture.
Read the report in pdf format here.
Document Type:
BCHR release
Feature:
Featured
Issue:
General
Viewing all articles
Browse latest Browse all 1658
More Pages to Explore .....
© 2022 //www.rssing.com