cancel confirm NSFW Votes: (0 votes)
Are you the publisher? Claim or contact us about this channel.
0
Showing article 160 of 1658 in channel 13302667
Channel Details:
Viewing all articles
Browse latest Browse all 1658
0
0

On 23 Nov 2013 a local pro-government newspaper “Akhbar Alkhaleej” and three GONGO's, namely Bahrain Human Rights Watch Society (BHRWS), Karama Human Rights Society and the Gulf European Center for Human Rights, published the photos and names of 18 renowned Bahraini human rights defenders and political activists and alleged their responsibility for human rights violations and terrorist attacks among other allegations, and called for punishments against them. it is important to note that Faisal Foulad, the head of BHRWS, was one of the people named on the "End Impunity" campaign for his implication in the Bandargate report and reportedly overseeing confessions that were taken under duress.

Following this campaign, human rights defender Hussain Jawad, the Chairman of the European-Bahraini Organization for Human Rights (EBOHR), one of the defenders targeted in that campaign was arrested on 24 Nov 2013 after he went to the Wusta police station (Isa town) to file a complaint for defamation and incitement to kill against the above mentioned newspaper and GONGO organizations. He was transferred to Noaim police station and he was charged with “inciting hatred of the regime” on the background of a speech he gave in Manama earlier this month. He was kept in custody until he was presented to the public prosecution the next day 25 Nov 2013 where he was interrogated in presence of his lawyer. Public prosecutor then ordered his detention for 15 days pending investigation. He was transferred to the Dry Docks temporary detention center. 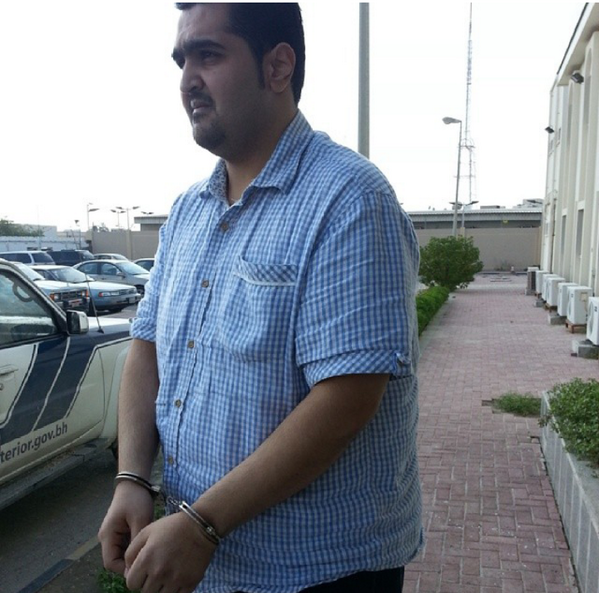 Defender Hussain Jawad has been active in reporting on human rights issues in Bahrain, talking to the media, and participating in local human rights events as well as communicating with the UN OHCHR office. His arrest came one day after his picture was published in the local press as "wanted" as a response to BCHR's "End Impunity" campaign.

On 25 Nov 2013, the court of cassation rejected an appeal from the imprisoned president of the Bahrain Teachers Society, Mahdi AbuDeeb, concluding a 2 years and a half retaliation show trials that have disregarded the results of an investigation of reported torture allegations and proceeded with upholding a 5 years prison sentence for AbuDeeb.

Mahdi AbuDeeb has been in detention since 6 April 2011 after a violent arrest when security forces threw him from the second floor of the house he was in. He was held incommunicado for more than a month with no access to his family or lawyer, and kept in solitary confinement for the whole period until his first military court hearing on 7 June 2011 alongside the vice president Mrs Jalila Al-Salman. Both Abudeeb and Al-Salman have reported that they were subjected to severe torture and ill-treatment in detention to force confessions. On 23 September 2011 Mahdi and Jalila were sentenced by a military court to 10 and 3 years imprisonment respectively for calling for a teachers strike. On 21 October 2012 their sentences were reduced to 5 years and 6 months imprisonment. The charges against them were: halting the educational process, inciting hatred, and attempting to overthrow the regime by force. Jalila was released after she served the 6 months prison sentence, but fired from her work as a teacher in a government school due to her conviction.

On 25 Nov 2013, lawyer of imprisoned human rights activist Zainab Al-Khawaja said that a new case has been brought against her and a new trial will commence on 22 Dec 2013 on charges of “insulting a police officer”. Al-Khawaja, who is serving a total of 12 months on multiple charges and due to remain in prison until Feb 2014, has written from prison about the circumstances of this new case, which was a result of Al-Khawaja standing to defend another prisoners against prison’s guard insults and humiliation.

She was interrogated at the prison in absence of her lawyer. (Read the details here) The timing of the new case seems only a measure to keep the human rights activist in prison for a longer period. These new charges appear to come as an act of retaliation against the recent campaign of BCHR to end impunity, In which several government officials were named as human rights abusers, including the head of women prison who ordered and allowed ill-treatment towards prisoners including activist Al-Khawaja. The BCHR had warned that families of members of the BCHR are the most likely targets of retaliation to the campaign.

The GCHR and BCHR believes that the human rights defenders Hussain Jawad, Mahdi AbuDeeb, Jalila Al-Salman and Zainab Al-Khawaja have been targeted with arrest, detention and unfair prison sentences solely due to the legitimate exercise of freedom of speech and peaceful activities in defence of human rights in Bahrain. In the cases of Hussain Jawad and Zainab AlKhawaja,  it also comes as a form of retaliation against the "End Impunity" campaign.

Therefore, the GCHR and the BCHR call on the US administration and other governments that have influence in Bahrain including the UK government, the EU and the leading human rights organizations to: