cancel confirm NSFW Votes: (0 votes)
Are you the publisher? Claim or contact us about this channel.
0
Showing article 213 of 1658 in channel 13302667
Channel Details:
Viewing all articles
Browse latest Browse all 1658
0
0

The authority turns the Children of Detainees ‘Stateless’ Until Further Notice

The Bahrain Center for Human Rights condemns the acts of vengeance practiced by the authority in Bahrain against the prisoners of conscience and political prisoners, among those acts is depriving their children from obtaining the required ID papers such as the ID and passport. This multiplies their agony as it deprives them from receiving health and education services that require having an ID. The BCHR had documented at least four cases where there was a lack of legal justification for depriving the children from obtaining ID documents and passport and they are as follows:

The child Zainab was born 28 days after her father’s arrest in April 2011, and since then the family has not been able to issue a passport for her, without clear justification. She is the daughter of Sheikh Abdullah Al-Mahroos, known locally as Mirza Al-Mahroos, who was arrested by members of the National Security Apparatus along with regime forces on Friday 1 April 2011. The family stated that he was subjected to beating in front of them, before being taken to the Ministry of Interior building in the capital, Manama. Al-Mahroos – according to his statement – was subjected to torture on the hands of the officer Bader Ibrahim Al-Ghaith[1], and Nasser Hamad Al-Khalifa,[2] as well as the former Head of the National Security Apparatus Khalifa Abdullah Al-Khalifa[3] and others who Al-Mahroos was able to identify and had their names documented. Al-Mahroos was accused of attempting to overthrow the regime[4] by force along with 20 other political leaders[5]; among them is the former president of the BCHR Abdulhadi Al-Khawaja. Al-Mahroos is serving a 15 years’ imprisonment sentence. 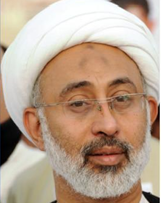 The latter complains of the harassments he faces in prison, among them is preventing him from visiting his wife who suffers from a chronic disease which makes her unable to visit him at prison, despite having the documents that prove so. This is in addition to the deliberate neglect to his health condition, which requires special care whether by providing medicine or having constant physiotherapy sessions. Al-Mahroos stated that the prison administration refused his request to coordinate a visit in order for him to see his brother, detained at the same prison. Al-Mahroos had stated all that to the General Secretariat of Complaints, however, nothing changed in those matters. 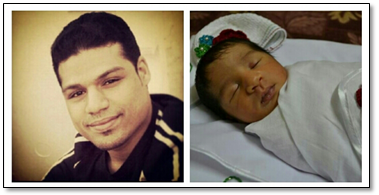 The child of the military man Hussein Ahmed Hasan (28 years old), who was born on 13 October 2013 with a health problem in the head, and which Salmaniya Medical Complex refused to receive and treat her because her mother did not have anything to prove the child’s identity, although her grandfather has authorization to issue a passport for her. The Public Prosecution refused to allow renewing the detainee’s passport which expired, and because of that his daughter was deprived from issuing any document that proves her identity. The child’s mother stated that her daughter’s health condition is deteriorating because hospitals refuse to receive and treat her.

Worth mentioning, Hussein Ahmed Hasan works at the Ministry of Interior with a rank of a community service policeman. He was arrested on 10 May 2013, and was charged with assaulting a security man and assembling, and he was interrogated due to his absence from work during the National Safety period and his participation in the massive protest at the Pearl Roundabout in February 2011. The Court sentenced Hussein with 8 years in prison.

Jenan Jaffar Hussein Eid (One and a half years old): 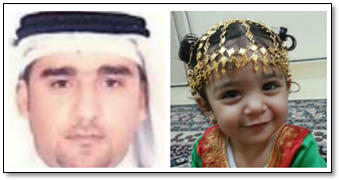 The child of the detainee Jaffar Hussein Eid was born on 14 June 2012, 20 days before her pursued father was arrested, and the family is still not able to issue a passport or ID for her. Eid was arrested on 3 July 2012 by civilian members affiliated with the National Security Apparatus and accompanied by regime forces. The Court charged Eid with joining a group whose aim is to call for suspending the provision of the Constitution and laws, preventing the state institutions and public authorities from practicing their work, assaulting the personal liberties of citizens and public rights, breaching public order, and subjecting the Kingdom and its safety to danger, and terrorism was one of its means to achieve that. The case was locally known as the ‘5 Ton case’: the Ministry of Interior had declared that it had found 5 tons[6] of explosives in the possession of those it arrested. Eid is currently serving a life imprisonment sentence.[7]

Eid stayed in solitary confinement until a late time since his arrest, and he was in a bad health condition at that time: he was vomiting blood in addition to severe pain in his kidneys. Instead of treating him, the prison administration gave him an IV injection and returned him to prison with a prisoner who suffers from scabies[8]. Eid is still suffering from deliberate neglect to his health condition which led him to announce starting a hunger strike days ago[9] until he is taken for treatment by a specialized doctor, as he suffers from swelling in his feet which makes him incapable of sitting and even praying.

Eid’s wife said that she filed a complaint at the National Institution for Human Rights, and filed another complaint to the General Secretariat of Complaints, however nothing changed since then. These acts are considered a form of mental torture for the detainee’s family and his daughter who bears no guilt except that her father went out, as other Bahrainis had, to demand freedom and justice. 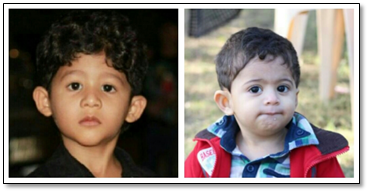 The children of the detained military man Younes Ali Marhoon (36 years old), is one of the military men who refused to participate in suppressing the people during the massive protest period at the Pearl Roundabout, and stood alongside his military colleagues on stage and gave a speech in solidarity with the people’s demands for democratization and freedom. Marhoon was in hiding from the security apparatuses for more than 2 years before the civilian members affiliated with the National Security Apparatus accompanied by regime forces raided his house on Wednesday afternoon 24 July 2013 and arrested him. Marhoon’s family stated that he was subjected to beating by those who arrested him before their eyes, where a verbal quarrel took place between his family and the ones detaining him.

Younes Marhoon is now serving an 8 years imprisonment in two cases, one of them is civilian where he was charged with assembling and the other is military and he was charged with inciting hatred against the regime. The Court of Appeal upheld the verdict against Marhoon for a year in prison in the first case, while the Military Court sentenced him with 7 years in prison in the other case.

The wife of the detainee Younes stated that she coordinated with her husband to obtain authorization to issue passports for her children, however the passport directory refused to accept the authorization and asked for an official document that proves Marhoon’s arrest. When she went to the police station in this regard, they told her that they do not issue these types of documents – a document that proves a person’s arrest – the family were at loss.

The Bahrain Center for Human Rights finds that the authorities in Bahrain use depriving children from official documents especially ‘the passport’ as a means to punish the opposition and citizens, especially those who participate in the demonstrations and events that demand freedom and self-determination, while the children suffer as a result of being deprived of receiving health and education services, as well as restricting them and their families transportation in cases of emergency that require travelling for treatment. The authority had on 7 November 2012 revoked the citizenship of 31 Bahraini citizens; among them were a cleric, two former MPs and a lawyer, without any court order or legal justification[10]. The Ministry of Interior justified this decision by saying that those who had their citizenship revoked are harm to the country, and it emphasized that it will take the necessary measures to implement the decision, and amidst the measures taken by the Ministry of Interior is summoning the citizens who had their citizenship revoked to withdraw their official citizenship documents, which includes the Bahraini passports, and asked them to correct their legal status.

Based on the above, the BCHR calls on the United States, United Kingdom, United Nations and all the authority’s close allies and relevant international institutions to: