cancel confirm NSFW Votes: (0 votes)
Are you the publisher? Claim or contact us about this channel.
0
Showing article 226 of 1658 in channel 13302667
Channel Details:
Viewing all articles
Browse latest Browse all 1658
0
0

The Bahrain Center for Human Rights expresses concern about the continuation of grave violations including abduction of civilians, severe beatings and leaving them in a stranded area. These actions appear to come as a form of punishment and threat for those who participate in pro-democracy protests in the country. The BCHR has document numerous such cases in different areas that witness daily protests demanding the right to self-determination.

A civilian, who asked to remain unnamed for safety reasons, told the BCHR that he was abducted by security forces on the 17th of January 2014. He was reportedly severely beaten with different weapons and blunt objects. He added that he was verbally abused, and the security forces used very derogatory sectarian terms during the beating. The victim was then taken to Karraneh beach, where he thought he would be dumped, but the security forces continued to beat him until he lost consciousness after which they left. A number of Karraneh residents found him and moved him to a house where he was treated by a volunteer nurse as he feared anticipated arrest if he were to go to the hospital. 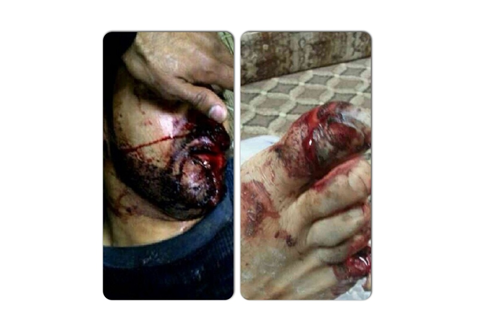 Photo: Injuries of the citizen who was abducted

The BCHR has documented many similar cases like the Karraneh victim; one of the latest being two victims who were abducted in Bilad AlQadeem on the 11th of January 2014. The two victims, whose names are also withheld for safety reasons, stated to the BCHR that they were abducted by security forces, tied and blindfolded, then severely beaten. These two victims also reported verbal abuse, and the constant use of sectarian derogatory terms. The victims added that the security forces threatened them to stop protesting or they will come back for them; they were released approximately an hour later. 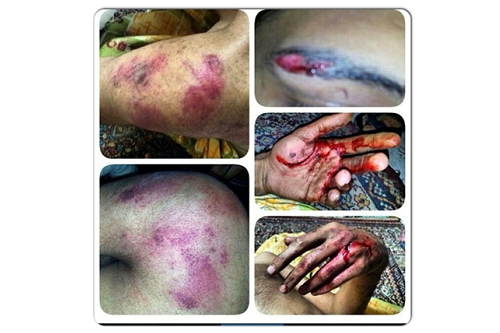 Photos: Injuries of the two young men who were abducted and beaten in Bilad Al-Qadeem

At a time when the authorities in Bahrain claim that security forces adhere to the rules of Police Conduct and that this guarantees their best behavior while on duty, the BCHR has documented numerous cases of abductions, including children; when the victims are subjected to severe beatings then released with threats that they must stop protesting or face further consequences. In several cases victims were forced to work as informants for the police. Recommendation number (1722 - c) of the Bahrain Independent Commission of Inquiry stated: “To implement an extensive program of public order training for the public security forces, the NSA and the BDF, including their private security companies, in accordance with UN best practices. To ensure future compliance with the Code of Conduct for Law Enforcement Officials, and the Basic Principles on the Use of Force and Firearms by Law Enforcement Officials, the security forces should be trained in the human rights dimensions of detention and interrogation, and in particular the obligation to refuse to participate in any actions involving torture and other prohibited ill-treatment.”

The BCHR believes that these practices are meant to create a culture of fear to prevent people from their legitimate right to peaceful protest. These violations and the continuation of other violations come as a direct result of the culture of impunity implemented by the highest levels of the government. The same officials in charge of similar violations documented in the BICI report continue in their positions, unless promoted, thus the continuation of these violations come as no surprise.

Based on the above, the BCHR calls on the United States, the United Kingdom, the United Nations and all other ally governments and relevant international institutions to:

The BCHR calls on the Government of Bahrain to: