cancel confirm NSFW Votes: (0 votes)
Are you the publisher? Claim or contact us about this channel.
0
Showing article 253 of 1658 in channel 13302667
Channel Details:
Viewing all articles
Browse latest Browse all 1658
0
0

69 Protestors Arrested in 3 Days and Tens of Injuries

The Bahrain Center for Human Rights condemns the persistence of the authority in Bahrain to adopt security solutions as the only means to suppress the protests which demand democracy and self-determination. The Bahrain Center for Human Rights had documented several injuries caused by the abuse of police against the protestors and the arbitrary arrest of more than 50 citizens among them children during the three days (13, 14, 15 February) in which the Bahraini people commemorated the anniversary of the revolution which had begun on 14 February 2011 of which the main area of protests was the Pearl Roundabout before Bahrain’s ruler Hamad Al-Khalifa announced a state of emergency and the Peninsula Shield Forces intervened to disperse the peaceful protest which lasted for a month, in addition to demolishing the memorial which has become the symbol of Bahraini’s revolution.

Starting from 14 February 2011, demonstrations and protests were organized in Bahrain demanding further democracy. The movement was inspired by the revolutions of Tunisia and Egypt – what was known as the Arab Spring – however the authorities in Bahrain dealt violently with these demonstrations and protests, and it brutally attacked the peaceful demonstrators in the Pearl Roundabout[i] and in all the streets of Bahrain, and it announced a state of national safety (emergency law) on 15 March[ii] 2011, the army was deployed in the streets and the Peninsula Shield Forces[iii]– which is mostly made up of Saudi forces – were sent to intervene and impose the state of emergency, and they deployed the security and military forces that roamed the areas and villages which were defying the authority, and they set up check points in many of the areas of protests. More than 80 people have fallen victims to the attacks of the security forces and army against the protestors until the date of writing this report, in addition to the arrest of more than 4000 detainees in the months subsequent to imposing the state of emergency. As a result of the continuing policy of impunity there are more than 3000 individuals in prison, either detained or convicted. More than 50 people have lost their eyes or parts of their bodies as a result of directly being targeted at by the regime forces.

13, 14, 15 February 2014: the regime forces attack the demonstrations and suppress all forms of protests:

Public forces announced organizing protests on the third anniversary of the public protests for three days starting on Thursday 13 February 2014 and ending on Saturday 15 February 2014, the calls included a comprehensive civil disobedience excluding the medical sector, and closing shops, and organizing peaceful protests in various areas of Bahrain, in addition to heading towards the first main area of protests at the Pearl Roundabout which is still besieged by the military forces. 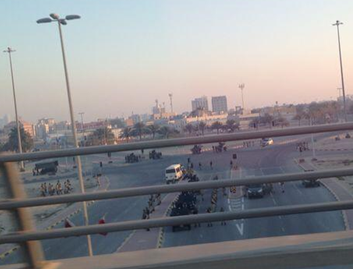 The BCHR had documented the arbitrary arrest of 69 cases, 17 of them were released at a later time, and among those were 15 children. The BCHR had also documented tens of injuries that were mostly treated in field hospitals or homes as the protestors feared arrest if they had gone to receive treatment in public hospitals. Among the injuries, was the shotgun pellet that hit the citizen Mahdi Jawad Al-Qaffas (17 years old), eye-witnesses stated that the security forces were practicing collective punishment against the area of Sanabis, close to the Pearl Roundabout, where it used teargas and shotgun pellets against the protestors of the area, among those that were injured and arrested was ‘Al-Qaffas’; the regime forces surrounded him and transferred his wounded body via an ambulance to the BDF hospital which denied his presence when his parents went to ask about him[iv]. The Ministry of Interior mentioned on its official account on the social network Twitter that its forces were confronted with an attack from a group of terrorists which forced them to do the necessary. Al-Qaffas’s family were unable to meet him after arrest until amid a serious concern for his health, especially that he lost a lot of blood, as was seen by his family in the pictures posted by activists on social media networks. On 19 February 2014 his family was able to see him at the military hospital. His family said that he appeared in a bad condition, unable to move, and that he has lost a part of his leg due to the shotgun injury. The family added that Al-Qaffas told them he was beaten by the security men after arrest until he reached hospital covered with blood. 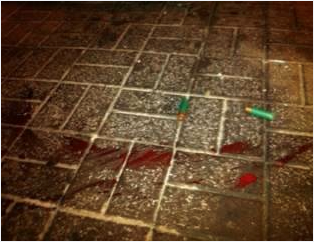 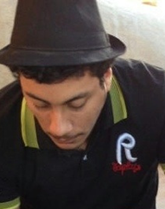 The Head of Monitoring at the BCHR, Sayed Yousif Al-Muhafda said on his official account on Twitter that Al-Muwali was shot with shotgun pellets that situated in his head and eye[v]. Many protestors were arrested in an arbitrary and brutal manner[vi], and women were assaulted[vii] in an attempt to discourage them from participating in protests. Some villages witnessed the widespread of armed civilian militia that are supported by the regime forces. Activists uploaded a video on YouTube that shows armed civilian militia[viii] supporting the regime forces in chasing the protestors and attempting to arrest them in the area of Abu Saiba on Friday 14 February 2014. 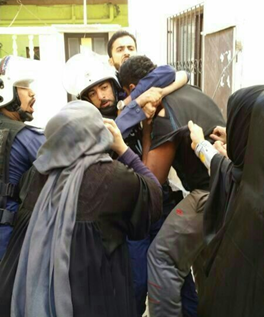 Political bloggers and activists and other users mentioned that telecommunication companies in Bahrain proceeded to reduce the Internet speed[ix] from Thursday afternoon 13 February 2014 in conjunction with the calls by the Bahraini opposition to address the US president Barack Obama and the UN Secretary-General Ban Ki-moon by mentioning their accounts in Tweets on the social media network Twitter. Activists believed that the telecommunication companies received orders from supreme bodies to reduce the Internet speed in an attempt to prevent Bahrainis from reaching out to the international community and posting the violations practiced by the authority and that which it will practice in the three-day event. Despite that, the Bahrainis were able to achieve the mission and challenge all the obstacles imposed by the authority.

Imam Al-Sadiq mosque – in Duraz – was subjected to an assault on Friday 14 February by firing teargas canisters at it in a blatant violation against places of worship. 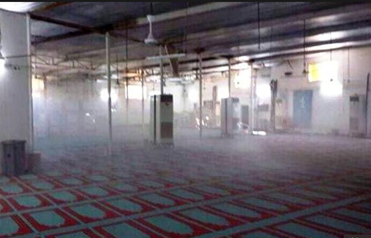 Bahrain’s ruler Hamad Al-Khalifa in a televised speech: criminalizes criticizing him and annuls the opposition’s demands:

The state television broadcasted a speech by Bahrain’s ruler Hamad Al-Khalifa on the occasion of the National Action Charter’s anniversary, 14 February[x], in which he stressed that there is no revolution in Bahrain, and that the people, all the people, have spoken when they voted for the National Action Charter, in disregard to the fact that he did not live up to his promises, as well as requesting several foreigners to write a Bahraini constitution that was opted for by the public groups and political opposition forces. He also neglected all the international and UN[xi] calls in relation to improving the condition of human rights in Bahrain and practicing political and peaceful human rights work without any harassments or restrictions. This speech comes days after Hamad Al-Khalifa’s endorsement of a law that criminalizes criticizing him[xii] and approves imprisoning whoever does so with a period no less than 7 years, and a fine of ten thousand Bahraini dinars in a clear and explicit combat against freedom of opinion and expression.

Worth mentioning, many citizens who are protesting the policy of the ruler Hamad Al-Khalifa had deliberately put his photo on the ground and walked on it while others wrote his name on the streets as an expression to condemn the role of impunity which he exercises and his contribution in the demographic change through illegal naturalization for a large number of foreigners.

On the other hand, the Ministry of Interior announced on its account on Twitter[xiii] on 15 February 2014 the death of one of its members as a result of injuries he sustained in a ‘terrorist bombing’ which it had announced about the previous day in the area of Al-Der. While the BCHR cannot validate the claim of the Ministry of Interior amid the absence of independent investigation bodies, it confirms its call on all parties to commit to peaceful action.

Based on the aforementioned, the Bahrain Center for Human Rights calls on the US, UK, UN and all the close allies of the authority and relevant International institutes to:

Finally, worth mentioning, the recommendations of the Bahrain Center for Human Rights do not in any form mean marginalizing or annulling any of the vital recommendations and which are the immediate and unconditional release of all political prisoners and prisoners of conscience.