cancel confirm NSFW Votes: (0 votes)
Are you the publisher? Claim or contact us about this channel.
0
Showing article 272 of 1658 in channel 13302667
Channel Details:
Viewing all articles
Browse latest Browse all 1658
0
0

The Bahrain Center for Human Rights expresses its deep concern for the Bahrain Authority’s persistence in adopting mental and physical torture as the only means to extract confessions from detainees. The BCHR received information that the detained actor Sadiq Jaffar Al-Shabani (31 years old) was subjected to torture in the Criminal Investigation building in Adliya. Al-Shabani had been arrested by the Omani Intelligence on Monday 27 January 2014 when he was in Oman. The Omani authorities had handed Sadiq over to the Bahraini authorities and he was in an enforced disappearance for more than 10 days.[1]

Al-Shabani informed his family that he was able to identify one of the people who tortured him and he is the lieutenant Fawaz Al-Sameem, however he was unable to identify the rest. Al-Shabani had stated that the one interrogating him had asked him, ‘Do you want us to treat you as a human or as an animal?’ The questions then followed, in order to force him to confess to joining the ‘Tamarud’ (rebellion) movement – and which is a movement that runs peaceful anti-government activities – however Al-Shabani denied his relationship with the Movement, and by that they handcuffed him from behind and told him that they will treat him like an animal. Sadiq said that Al-Sameem and the rest of the interrogators stripped him fully off his clothes, and sexually assaulted him by inserting a rod in his anus, and then they showed him private photos of him with his wife which they had obtained when they raided their house during the ‘National Safety’ period and they threatened to rape her. Al-Sameem misled him to believe that his wife was in the next room, and they made Al-Shabani hear the voice of a girl screaming as if there was someone raping her. They also brought to Al-Shabani photos of girls from his family and they threatened to rape them all if he did not confess. His penis was pulled with a string and cold and hot water was poured on him. Al-Shabani added that he was electrocuted in his anus, and he was given a hard slap on his face and ears which caused his face to swell and his anus to bleed; this is in addition to the physical and mental pain he still suffers from. Amid the investigation, Al-Shabani was asked to determine the nature of his relationship with Sayed Yousif Al-Muhafda – Vice-president of the BCHR – and they threatened to arrest and rape him as well. 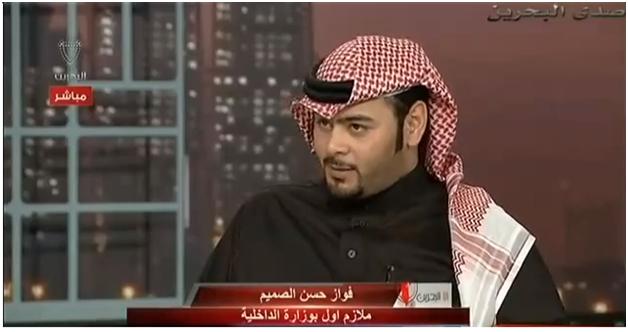 This is not the first time that the BCHR receives statements from detainees about being subjected to torture by the lieutenant Fawaz Al-Sameem, among the activists who stated that are the media worker Jassim Al-Noaimi and the photographer Hussein Hubail[2]. The BCHR confirms documenting hundreds of cases that prove the existence of torture in the prisons of Bahrain[3] and which at times caused the death of 5 detainees which Mr Bassiouni had documented and mentioned in the Bahrain Independent Commission of Inquiry report. However none of those who practiced torture have been held accountable until this day which confirms the BCHR’s belief that torture is a recognized system and the lack of accountability was and still is the means of impunity and thus the number of victims is escalating.

While the Authority in Bahrain denies the existence of torture in Bahrain, it is still banning the UN Special Rapporteur on Torture – Juan Mendez – from entering Bahrain too look into the conditions of more than 3000 prisoners of conscience in the Bahraini prisons. Mendez stated before the Human Rights Council during the 25th session held on 10 March 2014 that he is worried about the torture complaints that are continuing to be received in Bahrain[4], noting that he is ready to carry out the postponed visit to Bahrain without any compelling reasons and that the government has to cooperate to schedule a date for the visit without any further delay. Mendez also stressed that the countries that practice torture have to be aware that not signing the Optional Protocol to the Convention Against Torture (OPCAT) means being pursued by international law.

Based on the aforementioned, the Bahrain Center for Human Rights calls on the United States, United Kingdom, United Nations, European Union, and all the close allies and international institutes to lay pressure on the Bahraini Authorities in order to: