cancel confirm NSFW Votes: (0 votes)
Are you the publisher? Claim or contact us about this channel.
0
Showing article 290 of 1658 in channel 13302667
Channel Details:
Viewing all articles
Browse latest Browse all 1658
0
0

The BCHR is concerned for the health and well being of Mohammed Abdullah Ali Al-Tajer, 25 years-old, who was arrested on 06 August 2013 during an evening house raid. He is currently being held in prison where he is being denied adequate medical attention. The BCHR believes that Al-Tajer’s detention is arbitrary, and his arrest is an act of reprisal against his cousin – the lawyer and human rights defender of the same name – Mohammed Al-Tajer.

On 06 August 2013, Al-Tajer’s sister reported that she heard a knock on the door of their home. A Bahraini officer told her through the door that it was the police. She asked the officers to wait because she was not wearing her head scarf, but the officers broke into the house regardless. There were four police vehicles and a civilian car outside. Some of the police officers jumped over the fence, while others came in through the garage door. He was taken away by the police in the civilian car, and was not allowed to put on his shoes. The family confirmed that the police failed to present a warrant to enter the house. The family was not given information about where Al-Tajer was being taken.

Al-Tajer was subjected to enforced disappearance for almost one week, as well as the four other individuals arrested at the same time. During this time, the family went to Samaheej police station, Muharraq police station and the CID, but no information was provided.

After a week since his arrest, Mohammed called to tell his family “I’m fine and I'm in the CID.” Two days later, the family received another call from him telling them he was in the Dry Dock prison. A couple of days later, he called again to inform his family about a date when they could visit him.

The first visit to see Al-Tajer in the prison was on 25 August 2013. His brother stated following the visit, "He looked fine to us when we saw him. I asked him if anything had happened to him, he didn’t respond. There were some small bruises visible but not much. We asked him what his charge was, he said he didn’t know".

Approximately one month after his arrest, Al-Tajer informed his family about the torture he was reportedly subjected to in the CID. He said he was beaten and electrocuted many times. Al-Tajer also stated that officers would tell him to confess, and when he asked what he should confess to, they would say just demand that he generally confess. He was also reportedly coerced to sign papers without being allowed to read them, and not knowing their content.

On 2 December 2013, Al-Tajer’s trial began. He was not taken to the public prosecution until one day before his trial. Al-Tajer denied all of the charges against him at the public prosecution, and informed the prosecutor that he was tortured into making the confession. The prosecutor reportedly told Al-Tajer that he can not drop the charges, or officially state that he was tortured. The prosecutor reportedly stated that he would include in the official records that Al-Tajer was punched one time (which was put on the lawsuit record).

Al-Tajer was again reportedly made to sign papers under duress. He was reportedly informed by the public prosecutor that if he did not sign, then he would be brought back again to the same office to sign. Al-Tajer signed the papers out of a fear that what reportedly happened to him before, would happen again.

Al-Tajer’s lawyer attempted to meet with him to receive authorization to legally represent him, but he was only given the chance to receive this authorization during the second hearing when he informed the judge that he had made several unsuccessful attempts. However, to date, the lawyer has not been allowed to meet his client in private, although he made a request during every court session. Al-Tajer’s lawyer submitted a complaint to the Ombudsman (see below) regarding this, however, he has yet to receive a response.

Mohammed Al-Tajer has two health issues. The first is that he suffers from severe headaches. Al-Tajer’s friends have reported that his headaches would be so severe that they would, at times, result in his passing out. Al-Tajer would be taken to the hospital, but was always only told that his blood sugar is low. He reportedly suffers from the same pains in the prison, and has reportedly fainted on at least 6 occasions. Al-Tajer reports that the authorities take him on occasion to the prison clinic where he is given pain killers, but never adequate treatment.

His second medical condition is related to the fact that he used to suffer from serious constipation before he was imprisoned, which has since led to further complications. Al-Tajer reports that he used to have pain and would drink a large amount of water in order to feel better. However, while in prison in December 2013, Al-Tajer started to bleed when passing stools, and believed that he had hemorrhoids. At times, he reported that he would not be able to sit or sleep as a result of the severe pain he was suffering from. He was taken to the clinic and, as usual, provided with painkillers.

After a short period, his condition further worsened and he started to bleed more frequently, and in larger amounts.

On one occasion, he was taken to the Salmaniya hospital but was not allowed to see a doctor. The prison authorities explained this by stating that they arranged for an appointment with a doctor on 11 March 2014.

On the evening of 20 February 2014, Al-Tajer fainted as a result of the bleeding, and was again given painkillers by the prison clinic. At night, he fainted again, and the prison authorities decided to take him to Salmaniya hospital; he reached the hospital at 1:00 am. Hospital staff collected blood from him to run blood tests, and he was seen by a doctor called Dr. Kamal. One of Al-Tajer’s brothers went to Salmanya when he learned that Mohammed was there. The brother stated that Al-Tajer lost a significant amount of weight (more than 10 KG) and looked pale. The doctor reportedly informed the brother that Al-Tajer needs surgery, but he is not allowed to operate on him, or admit him in the hospital. His brother asked the pharmacy what medicines were prescribed for him, and was told that he is receiving a suppository and more painkillers.

Al-Tajer was suffering from slight hemorrhoids (pile) before his arrest. He dealt with this problem by maintaining an appropriate diet and using a specified cream. After his arrest, the problem developed quickly due to the type of food he is given and lack of adequate medical care. In prison he started to suffer from bleeding when he passed stool.

The BCHR believes that the condition of the prison may have contributed in worsening his condition. The quality and kind of food the prisoners are given is poor, there is a general lack of hygiene in the prisons, and most importantly, he is being denied adequate medical treatment.

He attended his appointment in Salmaniya on 11 March 2014. The doctor prescribed medication, a specific diet, and a salt-and-water bath for the infected area. His family was allowed to provide him with these items only after taking his case to the local media.

The family filed a complaint at the Ombudsman (see below) but received no response. The Ombudsman visited Mohammed in detention and listened to his complaints, but the family and lawyer were not called in to provide further testimony.

The other three men arrested with Mohammed Al-Tajer are still in detention, and the final hearing in their case is scheduled for 23 April 2014. Their names are:

The Bahrain Center for Human Rights calls on the authorities in Bahrain to: 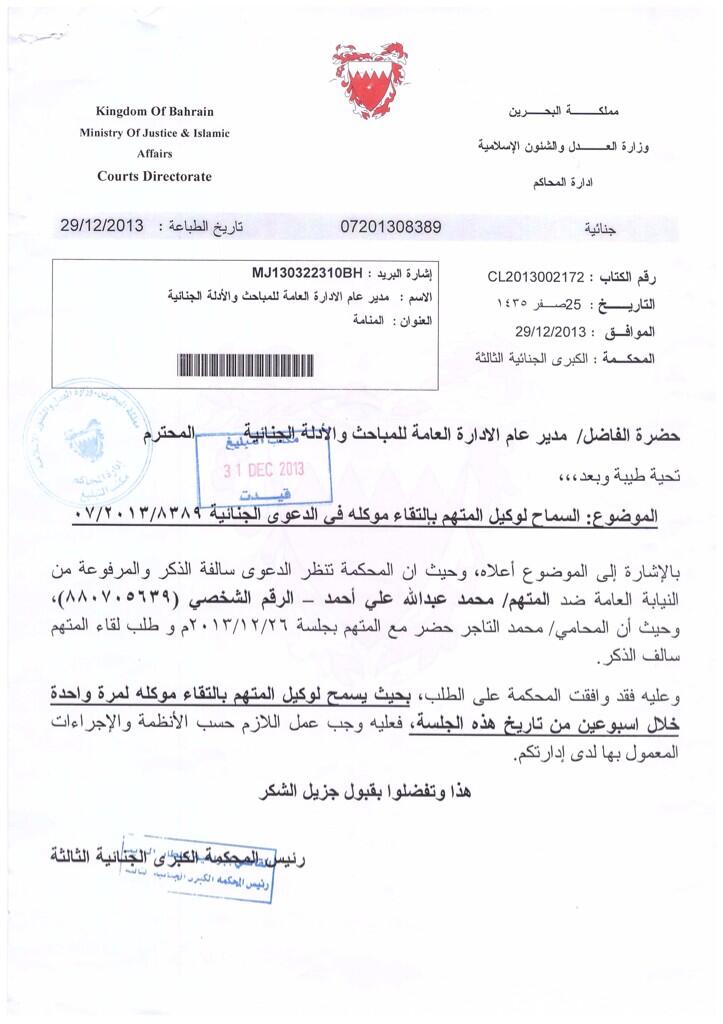 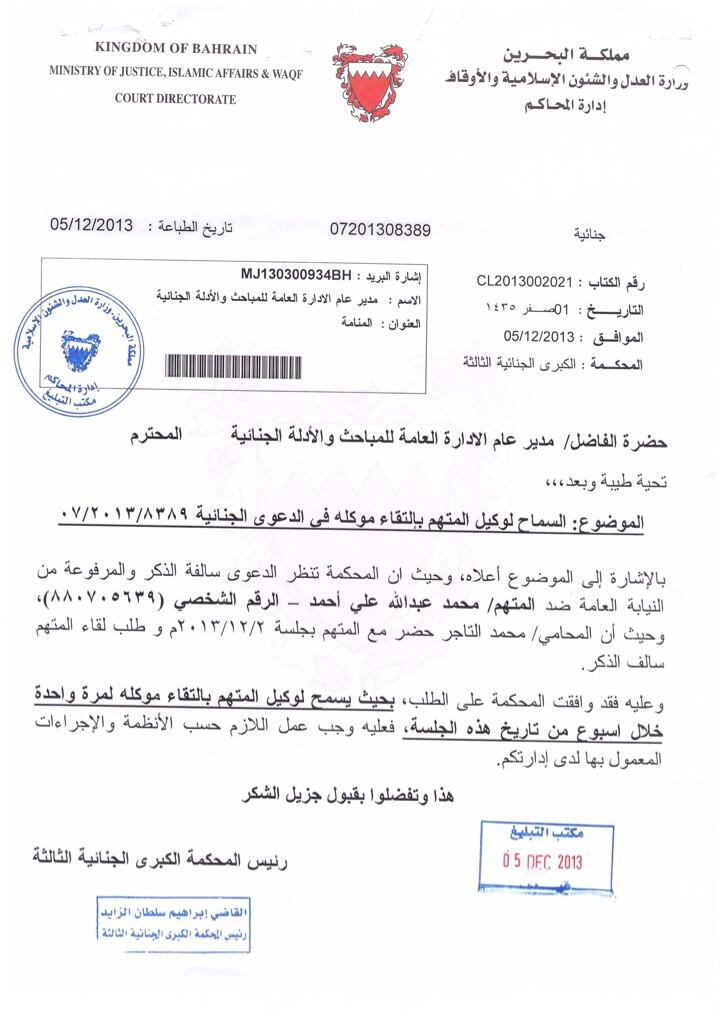