cancel confirm NSFW Votes: (0 votes)
Are you the publisher? Claim or contact us about this channel.
0
Showing article 296 of 1658 in channel 13302667
Channel Details:
Viewing all articles
Browse latest Browse all 1658
0
0

The Bahrain Center for Human Rights expresses grave concern in regards to the health and well-being of Hassan Sabah Al-Banaa, Redha Al-Ghasra, and seven others (listed below) arrested by the Bahraini government on Wednesday, 23 April 2014. Al-Ghasra’s family informed the BCHR that they received a seconds long phone call in which Al-Ghasra was only able to say hello and that he was fine before the line was cut; a member of family reported that Al-Ghasra’s voice sounded very weak. The BCHR has documented a pattern of these types of telephone calls as a common practice during episodes in which the detainees report that they are subjected to torture.

The family protested outside the Criminal Investigations Department on the day of his arrest. Officers outside the building threatened the family, stating that if any pictures of their protest in front of the CID is broadcast, Al-Ghasra will not be allowed to contact them. The photo below, of Al-Ghasra’s mother, is included at the specific request of the family. 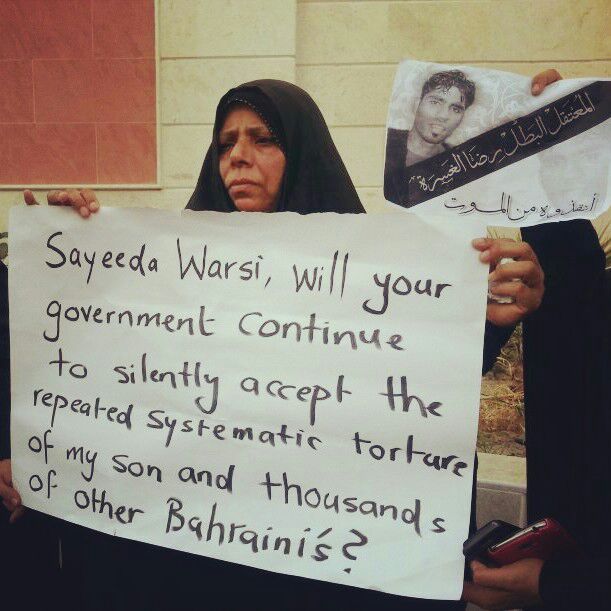 Al-Banaa and Al-Ghasra reportedly escaped from Jaw Central Prison at three o’clock in the morning on Tuesday, 22 April. While serving his prison sentence, Al-Ghasra was reportedly denied rights allocated to other prisoners. He had his hands and feet chained, and was not allowed access to books nor able to purchase supplies from the prison store. During his entire imprisonment period, Al-Ghasra was either in solitary confinement or in a locked cell with two criminal prisoners in a three meter by two and a half meter cell, and not allowed to go outdoors or interact with other political prisoners.

Given the previously documented force used against Al-Ghasra, and the pattern of arrests and subsequent systematic torture documented by the BCHR, the BCHR believes he is at serious risk for ill-treatment and torture. Prior to his 22 May 2013 arrest, Al- Ghasra was arrested twice, once in May 2011 and again in April 2012. During his last arrest, Al-Ghasra refused to speak of the worst torture he endured. However, he did give details including how everyday during his reported torture, all the officers present would spit into his mouth. He was also subjected to beatings on his face that resulted in several broken teeth as well as beating with sandals on his face that resulted in swelling that lasted for approximately two months. The severe swelling was witnessed by his family during their first visit to Al-Ghasra. Al-Ghasra told sources who spoke to the BCHR that during the torture he was subjected to he would reach points during which he “would wish for death.” Even when the torture stopped, he was in continuous pain. From the date of his arrest to the date of his escape, he was not allowed access to any kind of medical treatment.

The Al-Ghasra family has been repeatedly targeted by the authorities. Their home has been subjected to at least 70 house raids in a two-year period [1]. Two of Al-Ghasra’s brothers, Sadiq and Hassan, both under the age of 21, are currently in juvenile prison, and two of his other brothers are exiled and unable to return to Bahrain.

In a video capturing sound reportedly made during his May 2013 arrest, Al-Ghasra can clearly be heard screaming from severe beating. In December 2012, the government’s targeting took a reportedly more serious turn when Al-Ghasra was fired upon by the security forces at close range with shotgun pellets. Both he and his friend, Aqeel Abdulmohsen, were targeted with a gunshot from a close distance that led to his injury in the shoulder, while Aqeel’s face was dramatically injured [2].

Link to the photo of Abdulmosheen’s injury.

The BCHR believes that due to unsatisfactory prison conditions, previously documented cases of torture and excessive use of force, and psychological intimidation, the lives of Al-Ghasra, Al-Banaa, and the seven other arrestees’ lives are potentially at great risk.

The Bahrain Center for Human Rights calls on the United Kingdom, the United States, and all other close allies of the Bahraini government to pressure the authorities in Bahrain to: