cancel confirm NSFW Votes: (0 votes)
Are you the publisher? Claim or contact us about this channel.
0
Showing article 32 of 1658 in channel 13302667
Channel Details:
Viewing all articles
Browse latest Browse all 1658
0
0

The Bahrain Center for Human Rights is gravely concerned in regards to the authorities in Bahrain fostering the culture of impunity and continuing the practice of systematic torture which is used to extract forced confessions by their security forces personnel. An officer in Bahrain’s security forces uploaded a very disturbing video of an arrested youth who was forced to “confess” on camera what the officer dictated to him. The video was disseminated on the social network website “YouTube” and “Twitter” and went viral. 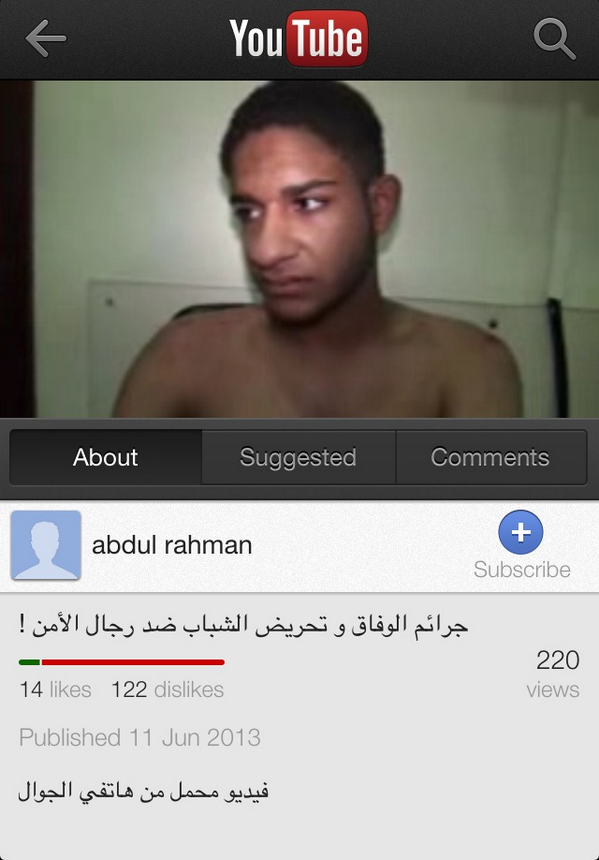 On 11 June 2013 at 1pm, a video was uploaded on YouTube apparently from the mobile of user “abdul rahman” http://www.youtube.com/user/MultiAlmannai otherwise identifying himself as Abdulrahman Al Mannai, who was later found to be a member of Bahrain’s security force. The video shows a shirtless young man being interrogated on camera. He identifies himself as Hussain Jameel Jafer Ali Marhoon from Hamad Town. After the video went viral, Abdulrahman Al Mannai deleted the video from his account http://www.youtube.com/watch?v=gzDCPwY87VE; however, the BCHR had already obtained a copy. 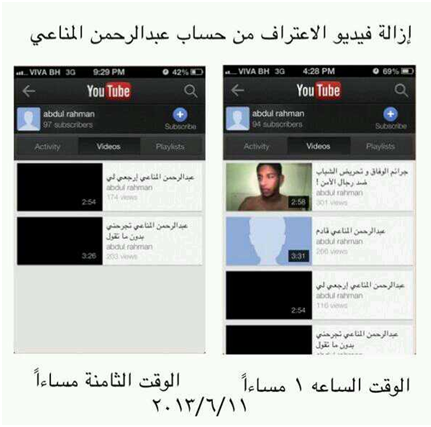 The interrogator asked Hussain Marhoon whether he had been abused by the police, to which the latter responded he had not, adding that his injuries were from a fall. The BCHR translated the video and sent it to an expert for his opinion.

Dr. Vincent Iacopino, MD and a Senior Advisor for Physicians for Human Rights, stated after examining the video that:

“The YouTube video is very disturbing as it seems likely that the confession was obtained through physical and/or psychological abuse. The detainee is naked, at least from the waist up; he appears anxious and fearful, and there is a bruise on his left shoulder that is visible when he stands up at the end of the interview.” 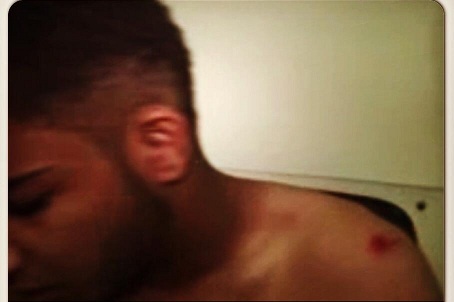 “In my opinion, the YouTube video of the alleged confession and the prevailing circumstance of detention in Bahrain (the absence of basic safeguards for persons deprived of their liberty, effective criminal complaint procedures, effective legal investigations of alleged crimes, and prompt (less than 24 hours) forensic medical evaluations of possible physical and psychological evidence of alleged abuse by independent experts in accordance with international, Istanbul Protocol standards) suggests that the confession was obtained through torture and/or ill treatment. Any allegations of abuse by the detainee should be prosecuted and adjudicated in accordance with international legal standards and any information obtained through torture and ill treatment should not be admissible in court.”

After the responses online to the video, the Ministry of Interior tweeted that they would investigate the incident and that those responsible had been suspended. Given the involvement of MOI officials at the very top level in wide spread human rights abuses; as well as the ongoing practice of systematic torture, the BCHR does not find the statement of the MOI about accountability to be credible. 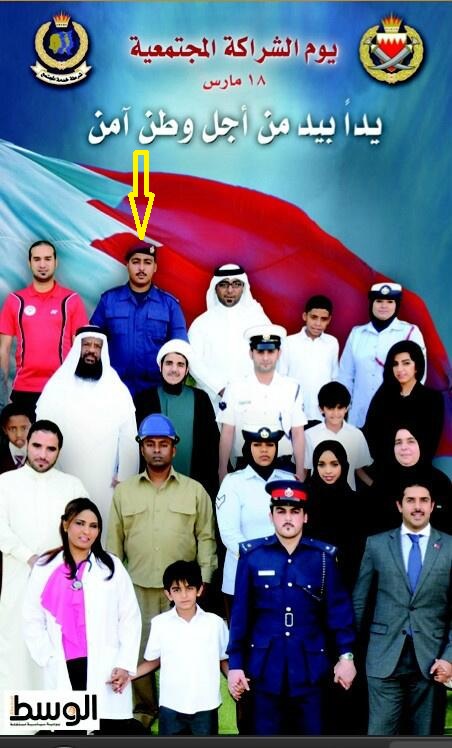 Photo: Abdulrahman Al Mannai on a poster made by the ministry of interior

This is not the only incident in which security force members publicly share such materials. A few weeks ago, a photo and a voice recording of another detainee were leaked on social media. The detainee, Redha Al Ghasra, was unconscious on the ground after being reportedly severely beaten and the audio recording was of him screaming from pain while being beaten reportedly during the arrest (More: http://bahrainrights.org/en/node/6146) 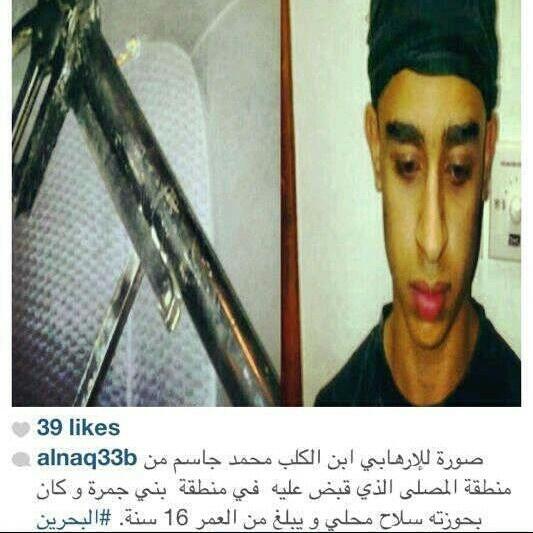 Also previously, an account on Instagram with the username @alnaq33b (the lieutenant) published a photo of 16 year old Mohammed Jassim who the user called a “son of a dog” stating that he is a terrorist and had been arrested. It is not possible for us to independently verify whether or not this user is actually a member of the security forces, as there is no name or picture; but the type of pictures published on this account suggest the person either works for the MOI or is closely connected. In spite of the authorities ability to find out whom the account belongs to, there has been no accountability or attempt to stop this user.

The BCHR has documented thousands of torture cases since 2011 and even before. The Bahrain Independent Commission of Inquiry referred to the practice of torture by security forces and the culture of impunity in its report. A number of detainees were killed due to torture; however, the practice of torture and the culture of impunity have not been addressed by the Government of Bahrain since accepting the findings of the BICI report. It is apparent by the ongoing systematic nature of these abuses that those in charge of the Ministry of Interior, the Central Information Department and the Public Prosecution are ordering, participating in, aware, and/or overlooking the violations (please refer to this report on CID complicity http://bahrainrights.hopto.org/en/node/5739). Unfortunately, there has not been accountability for the crimes committed by government agents, with the few low level police who are taken to court are either found innocent or given very short term sentences. Uploading the above-mentioned video by a member of the security force is a clear indication of the confidence of such officers in the lack of accountability within the Ministry of Interior; and the Government as a whole.

It is important to note here that the culture of impunity is implemented by the very top levels of the Government of Bahrain, namely King Hamad bin Isa AlKhalifa (read more here http://bahrainrights.hopto.org/en/node/5495). It is also very concerning that the same institution which is supposed to be investigating torture claims in Bahrain, namely a section of the public prosecution, continues to use confessions extracted under torture in court in political cases. To add to that, the judicial system in Bahrain is neither independent nor fair, and has been time and time again used as a tool to target political dissidents and human rights activists.

It should be noted that the Government of Bahrain delayed the visit of the United Nations Special Rapporteur on Torture, Juan Mendez, twice; effectively cancelling it. Juan Mendez has expressed his disappointment in a public statement when his visit was canceled for the second time. He denied the authorities allegations in the local media that he was responsible for the cancelation of the visit. The BCHR believes that the cancellation of the visit is due to the ongoing practice of systematic torture in Bahrain and the attempt to prevent the SR on Torture from reporting on it.

The Bahrain Center for Human Rights calls on the United States, the United Kingdom, the UN and all other allies and relevant institutions to put pressure on the Government of Bahrain to: