cancel confirm NSFW Votes: (0 votes)
Are you the publisher? Claim or contact us about this channel.
0
Showing article 364 of 1658 in channel 13302667
Channel Details:
Viewing all articles
Browse latest Browse all 1658
0
0

The Bahrain Center for Human Rights expresses grave concern over the safety of Bahraini activist Abdulelah Almahoozi as he is at great risk of being subject to torture and an unfair trial if Interpol hands him over to the Bahraini authorities in the coming few days, despite the fact that he was acquitted of all charges in Bahrain.

Abdulelah Almahoozi is a well-known Bahraini political activist who has been living in exile since April 2011, following the brutal crackdown on pro-democracy protests. He has been vocally criticizing the Bahraini government for its grave human rights record through his participation in televised interviews and political forums and he has been continuously advocating for freedom and democracy in Bahrain through peaceful means.

AlMahoozi was working in Bahrain as a municipality officer until 2011, when he left to live abroad. In 2013, he was accused with “accidental death” in the case of a collapsed building that resulted in the death of 13 migrant workers and the injury of another 8 workers in Jan 2013 after a fire erupted in their apartment (case number 1982/2013) (Refer to http://bahrainrights.org/en/node/5604).  He was officially charged with “committing fraud in an official document, and twisting the truth in the list of irregularities of the administration of legal affairs.” Given that AlMahoozi was out of the country he was not interrogated over these charges. However, he was acquitted of the charges on 6 March 2014, and the court stated on the reason for acquittal that the testimonies of the witnesses against AlMahoozi included uncertainties that do not live up to contentment the court.[1] Given that the public prosecution did not appeal against the acquittal within the one month period that is allowed in Bahraini law, the decision was final. 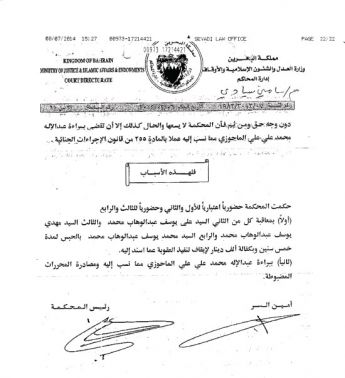 On 10 July 2014, the Bahrain General Directorate for Combating Corruption and Economic and Electronic Security announced that the arrest of AlMahoozi in Germany was based on an Interpol memo dated 14 March 2014, which is 8 days after his acquittal in Bahrain by the court. It has also announced that it’s working on arranging to receive AlMahoozi and submitting him for a trial. The Directorate has eliminated from its statement any mention of the acquittal of AlMahoozi by the court in the same case.[2]

The BCHR believes that AlMahoozi has been targeted by the government of Bahrain merely for his activism in support for rights and democracy for Bahraini people, and for expressing his opinions in accordance with the universal declaration of human rights. The Bahraini government should have canceled the request of arresting AlMahoozi once the court issued his acquittal verdict. By keeping his name on the international wanted list, the government of Bahrain has shown an intention to misuse the Interpol service to target AlMahoozi for his political activism.

Due to Bahrain’s long record of targeting political and human rights activists in the country, and the vast number of cases of torture in detention, there is a great risk that AlMahoozi could be subjected to torture if he is handed over to the Bahraini authorities. (Refer to the testimonies of the Bahrain 13 political and human rights activists http://birdbh.org/bahrain-13/) also refer to (http://bahrainrights.org/en/node/6804 ). Bahrain is denying access to the UN Special Rapporteur on Torture to visit the country since 2012.[3]

Based on the information above, the Bahrain Center for Human Rights calls on the German Authorities to:

The Bahrain Center for Human Rights also calls the United States, United Kingdom, United Nations, European Union, and all the close allies and international institutes to apply pressure on the Bahraini Authorities in order to:

put an immediate end to the practice of torture as a means to extract confessions, provide guarantees regarding the safety and security of detainees.