cancel confirm NSFW Votes: (0 votes)
Are you the publisher? Claim or contact us about this channel.
0
Showing article 391 of 1658 in channel 13302667
Channel Details:
Viewing all articles
Browse latest Browse all 1658
0
0

Teargas burn is not a sensation you forget. It tears through your nostrils, floods your lungs, chokes out your remaining supply of oxygen, festers underneath your clothing and clings to your skin like hot wax. You hear the bang of the gun, the whishing of the canister through the air, the clink of metal hitting the ground, and then the rush of what sounds like water flooding the street. Everything around you turns white – you see it before you smell it – and for a moment you wonder if you’re immune to tear gas. Two or three seconds later, you learn you’re not. You also learn that if teargas itself doesn’t cause tears, choking on it does.

In 2014 alone, CR gas (2-Chlorobenzalmalononitrile, the chemical compound found in many teargas varieties) has pierced the lungs of Turks, Bahrainis, Cambodians, Egyptians, Parisians, Palestinians, Brazilians, and thousands of other world citizens. It is not a feeling with which many Americans can empathize.

But seven days ago, a white police officer shot a black American teenager, 18-year-old Michael Brown, in Ferguson, Missouri. After the incident, police used tear gas and rubber bullets to dispel protestors who amassed onto Ferguson’s streets after his death. The town endured six straight nights of race riots, while Middle America in 2014 looking more like Washington, D.C. in the 1960s.

Under the 1993 Chemical Weapons Convention and the Geneva Protocol at large, teargas cannot be used in armed international conflicts. Yet, in one of the more disturbing ironies of international law, it remains permissible for domestic use. In 2004, a Nepalese medical journal stated:

The use of CS gas and other tear gases with comparable clinical effects should be taken as tantamount to chemical warfare against civilians.

Residents in Ferguson decried the police response to the protests as “excessive force,” “brutality” and a “siege” on their neighborhoods. Washington Post reporter Wesley Brown spoke to locals fearing for their families’ safety as teargas canisters landed on their front lawns and oozed chemicals into their homes.

Perhaps unknowingly, the pleas of Ferguson’s residents echoed the cries of Bahraini citizens, whose windows are regularly shattered by incoming teargas canisters, fumigating their homes with CR gas.

As photos poured out of Missouri, they became increasingly indecipherable from those taken by citizen journalists in Gaza, Manama, and Istanbul, where well worn communities of teargas survivors offered up techniques to Ferguson’s residents for minimizing the harmful effects of teargas: 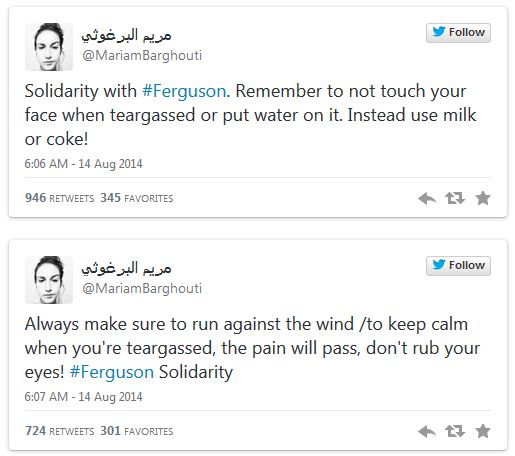 Ferguson’s protestors would have done well to heed the advice of their Middle Eastern and Turkish contemporaries. After all, they know what they’re talking about.

In both Ferguson, Missouri and Bani Jamra, Bahrain, there is a high probability the canisters in question were labeled “Made in the USA.” That’s right. We export teargas. We export massive quantities of it, and we make quite a bit of money doing it. We produce it in factories in Jamestown, Pennsylvania and Casper, Wyoming and Plainview, New York, and then we ship it out. Sometimes we go on television and ask our customers not to shoot it directly at their citizen’s skulls, to use the “crowd control” substance responsibly, and not as an offensive weapon against a “crowd” of only a few people.

We ship it to Israel, Egypt, Turkey, and a host of other militarized, oppressive governments renowned for human rights abuses against their own citizens or those they occupy. These regimes use our chemical warfare products in quantities and locations violating international guidelines. They unleash our chemicals in confined residential areas, on small crowds, and at close range. Elderly women die, suffocating in their bedrooms, and children’s faces are split open when canisters are aimed directly at their heads.

Then, when the smoke clears, when their nostrils stop burning, after they’ve picked up their brothers from the underground medical clinic next door, once their streets are covered in used canisters labeled “Made in Pennsylvania,” these victims of our American ingenuity go on social media and see that unarmed civilians in a U.S. suburb are drowning in teargas, too.

As viral support for #Ferguson protestors poured out of #Bahrain, #Palestine, #Egypt, and #Pakistan, social media analysts called teargas “the tie that binds” and “the great equalizer.” The GlobalPost amalgamated 25 photos showing that “teargas unites us all.” Unfortunately, this unity has been largely one-sided. As teargas tips and messages of solidarity were sent from the Middle East to Missouri, one began to wonder if this immense display of support would be reciprocated after the air in Ferguson clears while CR gas still lingers in places like Gaza.

A HuffPost editorial title recently proclaimed“We Should Be Talking About How Dangerous Teargas Is.” Absolutely. We should be talking about how dangerous it is for all people, not just Americans. We should be decades deep in that conversation by now. Another columnist exposed the companies “profiting from police brutality in Ferguson,” citing a June report valuing the global market for “non-lethal” weapons at $1.6 billion. Indeed, as events in Ferguson demonstrate, the same companies that export chemical weapons across the globe have domestic trading partners here in the United States. But, these partners were profiting off militarized crowd control long before Missouri erupted in protests. These profits will continue to flow until we start to reciprocate some of the global solidarity being sent our way.

This transnational solidarity was distinctly lacking from one of the first comments posted in response to a Washington Postreport on police violence in Ferguson:

The police act as if they were marines dealing with the unruly citizens of Fallujah.

If the protestors were Iraqi, would excessive force be warranted? Was the chemical abuse of Iraqi civilians during the Battle of Fallujah acceptable?

The next commenter proclaimed:

The guy who had thugs fire teargas into his yard would have been well within his rights to respond with deadly force.

Does this same logic apply to Bahraini youth who hurl Molotov cocktails at government security forces when their homes are targeted with canisters? Or to Palestinians who throw rocks at the Israeli Defense Forces through clouds of CR gas? Do Americans consider the police forces in Egypt, Turkey, and Cambodia to be “thugs” when they buy our chemical weapons?

Probably not. We still do not view all human beings gassed using U.S.-made chemicals as equal. Until we do, teargas will never unite us. Even in response to Ferguson, an “us versus them” mentality seems to persist among many Americans, implying that teargas deployment in Missouri is inhumane only because it is being done to “us.”

If we must reify this dichotomy, let us only do so in recognition of the incredible support“they” have shown “us.” American responses to this support will determine the legitimacy and legacy of the so-called “teargas solidarity” movement. Digital thank you notes from Ferguson to Gaza are beginning to appear on Twitter. This is a start. But the next time teargas canisters rain down on Manama or Gaza or Mumbai, “they” will not need our tips. They will just need us to stop sending teargas to their shores.