cancel confirm NSFW Votes: (0 votes)
Are you the publisher? Claim or contact us about this channel.
0
Showing article 41 of 1658 in channel 13302667
Channel Details:
Viewing all articles
Browse latest Browse all 1658
0
0

The Bahrain Center for Human Rights (BCHR) is gravely concerned in regards to the authorities in Bahrain fostering the culture of impunity, and especially in regards to a video which was published recently online showing Khalifa bin Salman Al Khalifa, the world's longest-serving unelected Prime Minister of 43 years, visiting an acquitted torturer to thank him and guarantee impunity.

On the 7 July 2013, a pro-government account on YouTube uploaded a video showing the Prime Mister visiting Lt-Colonel Mubarak bin Huwail after he was acquitted on 1 July 2013 of charges related to torturing medics in detention back in 2011. (Read More on: http://bahrainrights.hopto.org/en/node/6205). 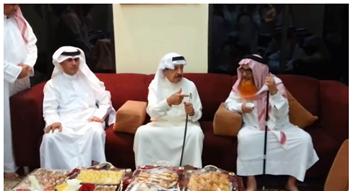 Photo taken from the video (Mubarak ben Huwail on the left, PM in the middle)

The Prime Minister’s visit to bin Huwail only reaffirm that impunity comes from the highest levels of the ruling family. It also reaffirms the fact that the judiciary system in Bahrain is neither independent nor fair; and far from being in line with international standards. Kangaroo courts and unfair trials continue against political dissidents in continuation of allegations of torture both inside and outside official government buildings; whereas those accused of extrajudicial killings or torture are either acquitted or given very light sentences in regards to the charges.

During the visit, the prime minister began with "We do not allow any harm towards you. These laws, no-one implements them on you. Our relationship with you, what is implemented on you is implemented on us. We are one body."

"As I told you, I came here to thank you for your patience, and for your kind work. The work of this whole family, is the reason behind your reputation which can't get any better."

"I came here to thank you all, and to thank Mubarak. He is our son, and nothing shall harm you, wherever you are, I'll always be there for you." The PM ended.

Link to the video: http://www.youtube.com/watch?v=YVundvyyNS8

It is important to note that Huwail had numerous torture allegations made against him over years. Rula AlSafar, the nursing society chief who was arrested on April 4, 2011 stated “The principal investigator, Maj Mubarak bin Huwail, tortured us. He blindfolded and handcuffed us during the interrogation. He wrote whatever he wanted to write and then took our signatures on the false statements by beating us. We were humiliated, intimidated and degraded.”

The culture of impunity in Bahrain has acquitted many other officers as well despite the presented credible evidences; most of the officers whom were put on trial for charges related to torture allegations, where either acquitted or given light sentences. Read more on: http://bahrainrights.hopto.org/en/node/6193

In addition to the thanks and impunity offered by the highest officials, the culture of impunity in Bahrain is as well represented in the form of offering promotions to the torturers instead of accountability. On 28 Jan 2013, the King has promoted Bassam Al-Muraj in a royal decree to become the General Director for Anti-Corruption, Economic and Electronic Security in the General Directorate, despite the credible torture allegations which have been made against Al Muraj for several years by local and international human rights organizations. Read more on: http://bahrainrights.hopto.org/en/node/5628

The BCHR believes that the policy of impunity is clearly practiced by the Public Prosecution and the Judiciary in Bahrain, and it is a systematic policy implemented at the highest levels of government, which was proven by the recent video of the Prime Minister. Also, the fact that the visit of the United Nations Special Rapporteur on Torture was effectively cancelled by the Government of Bahrain, which was due to take place in May 2013, is another indicator that the Bahraini government is not serious about implementing reforms and about abiding by the local and international laws. Read more on: http://bahrainrights.hopto.org/en/node/5720

Based on the information provided above, the Bahrain Center for Human Rights (BCHR) calls for: