cancel confirm NSFW Votes: (0 votes)
Are you the publisher? Claim or contact us about this channel.
0
Showing article 429 of 1658 in channel 13302667
Channel Details:
Viewing all articles
Browse latest Browse all 1658
0
0

Bahrain: The Regime Continues to Fight the Right to Form Peaceful Societies

The Bahrain Center for Human Rights expresses its deep concern for the significant development at the level of political and human rights liberties in Bahrain, after the authorities targeted the two authorized opposition political parties: Al-Wefaq National Islamic Society and the National Democratic Action Society ‘Waad’. The Minister of Justice, Islamic Affairs and Endowments, Khalid Ali Al-Khalifa, filed an administrative lawsuit in his capacity against the two societies, on the pretext that public conferences held by the two societies committed administrative violations.

On 20 July 2014, the Ministry of Justice, Islamic Affairs and Endowments, published a statement[1] on filing a lawsuit to request that Al-Wefaq activities be halted for three months until they amend their illegal status. According to the ministry, this was as a result of the invalidity of four conferences, due to lack of quorum. It was also alleged that Al-Wefaq did not adhere to procedures of openness and transparency. In his tweets, which he posted on the social networking site Twitter, the Minister of Justice, Islamic Affairs and Endowments said, ‘holding four invalid conferences with a participation of less than 5% means the society is ignoring the will of its members and verging into illegality’. The Minister of Justice added that they were ‘not holding correct public conferences, and those running the society resort to not publishing any information about their public conference for ear of scandal. Secrecy in ‘political work’ is a step backwards, and is considered to undermine the foundations of legitimate political work. The society’s failure since its establishment to follow the basis of democratic work has proven its lack of success in presenting a model for a civil political society based on democracy.[2]’ 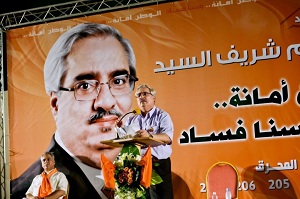 It is worth noting that the National Democratic Action Society ‘Waad’ received a letter from the Ministry of Justice, Islamic Affairs and Endowments in December 2012 asking them to delist Ebrahim Sharif from the general secretariat and from the society’s records, considering him a criminal prisoner who lost his civil and political rights. The ministry also requested the reform of the political office’s positions. The society responded with a letter in which it stood firmly behind its general-secretary, considering Ebrahim Sharif a prisoner of conscience who the authorities should release, instead of harrassing his society and seeking to close it.

This is not the first time the Minister of Justice, Islamic Affairs and Endowments – a member of the ruling family – has used his authority arbitrarily. Previously, he dissolved[4] the Islamic Action Society (Amal) after arresting most of its members. This was followed by the closing of Olamaa Islamic Council[5] - the highest religious body representing the Shiite population in Bahrain – and the liquidation of its funds based on a ruling of the High Administrative Court. At that time, the BCHR considered this a policy of systematic discrimination against the sect, and believed that the decision was a clear violation of Article (20) of the Universal Declaration of Human Rights, which states, ‘(1) Everyone has the right to freedom of peaceful assembly and association.’ Before all that, the BCHR was dissolved in 2004 following a decision from the Minister of Labour and Social Affairs on the pretext that the BCHR had committed acts that violate the Societies Law of 1989, and a bylaw governing the Society[6].

The BCHR believes that the regime in Bahrain is running a relentless campaign against the right to form and join peaceful societies, with the aim of silencing the opposition and finishing off peaceful political activity that calls on the regime to execute real reforms that contribute to improving political life and raising the level of liberties and democracy in Bahrain. The BCHR also believes that targeting ‘Waad’ specifically falls within the regime’s policy of sectarian discrimination; its general-secretary ‘Ebrahim Sharif’ is a Sunni opposition figure with a long history of peaceful political work; his arrest the and targeting of his society aimed to prevent moderate Sunni opposition voices from following the path that Sharif and his society took. Ebrahim Sharif is one of the detainees in the case known as the Case of the 13 Leaders. Many local and international human rights organizations have called for their release, considering them prisoners of conscience, a designation confirmed by Bahrain’s Independent Commission of Inquiry – Bassiouni’s Commission. Sharif is now serving a five-year sentence.

Additionally, the BCHR believes that these regime practices are a tool to blackmail opposition societies into accepting the superficial reforms proposed by the regime every now and then. Moreover, it is a way to push political societies to enter the parliamentary elections that represent genuine legitimacy for the government, whose resignation is demanded by various political parties. They also demand that the President be elected based on clear political standards and wide public acceptance. The BCHR emphasizes the right of political societies to practice peaceful political work according to Articles 21 and 22 of the International Covenant on Civil and Political Rights, which state the right of peaceful assembly and the right to form societies with others[7]. It also warns of the consequences of ending open political work, in its current limited form. This will lead individuals to work covertly - a part of the leadership system and control on the street will be lost.

Based on the above, the Bahrain Center for Human Rights calls on the United Kingdom, the United States, and all the governments of Bahrain’s allies to put pressure on the authorities in Bahrain to: