cancel confirm NSFW Votes: (0 votes)
Are you the publisher? Claim or contact us about this channel.
0
Showing article 478 of 1658 in channel 13302667
Channel Details:
Viewing all articles
Browse latest Browse all 1658
0
0

A video recently emerged showing a Bahraini police officer mistreating a prisoner and showering him with insults, while making references to the man’s Shiite faith. The video, posted on Monday to YouTube, quickly went viral – to the extent that the Bahraini authorities were forced to respond. The day after its release, the Interior Ministry announced the suspension of the police officers involved and the opening of an investigation. According to our Observer, it's all a smokescreen.

The images were posted by activists of the February 14 movement, the group behind the protests against the Sunni monarchy headed by King Hamad bin Issa al-Khalifa. The movement is now regarded by Bahraini authorities as a terrorist organisation. 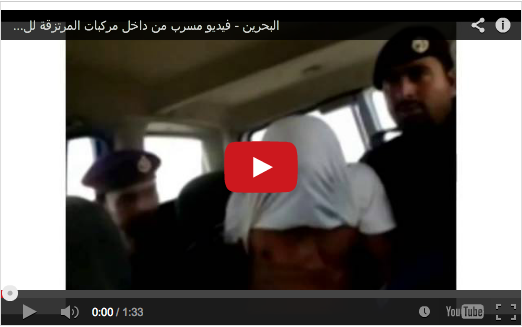 The video takes place in a police car, with a prisoner sitting on the back seat between two police officers in uniform, his hands tied behind his back and his head covered by his shirt. It is clear he is Shiite due to the police’s mention of "zawaj al-mut'a", literally meaning "pleasure marriage", the name given by Shiite Muslims to “temporary marriage”. The marriage is agreed between potential spouses for a limited period of time and generally sealed by a religious authority. This form of union, which is still practiced by a number of Shiites, is rejected by a large majority of Sunnis.

The policeman sitting in the seat next to the driver (whose face is hidden) asks the prisoner if he can make a "pleasure marriage" with his sister. "Do you agree?" yells the police officer. The prisoner nods his head as the officer continues: "And a Sunni, can she have a zawaj al-mut'a?". The prisoner remains silent, so the police officer gets angry: "Do not even say ‘Sunni’, you son of a b***!". The officer proceeds to punch the prisoner on the head and back while the other policemen try to calm him down.

The Interior Ministry said on Tuesday via its Twitter account that an investigation had been launched and that the police officers involved in the video had been suspended from their duties. 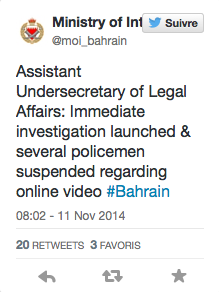 "However, Said Yousif Al-muhafdah, vice-president of the Bahrain Center for Human Rights, believes it is certain there will be no legal consequences for the police officers.

Unfortunately, the police officers who commit abuse or even acts of torture are spared due to a culture of impunity. Since 2011, there have been 7 or 8 proven cases of abuse, which came to light thanks to leaked videos.

Each time, it's the same scenario: the authorities announce the opening of an investigation, but the investigations go nowhere and very rarely result in sanctions. The ministry’s announcements are only intended to calm public opinion and sell a semblance of democracy abroad.

In the rare cases where there is a conviction, the sentences are eventually reduced. In May 2013, a police officer sentenced to 7 years of prison for shooting an unarmed demonstrator dead saw his sentence reduced to 6 months.

That same year, the court acquitted two police officers who killed a demonstrator by shooting him with buckshot pellets. The court found that the two officers had not fired with the intent to kill, and were therefore free to go [Editor’s Note: In May 2014, an unarmed 14-year-old protestor was also killed by buckshot pellets during a demonstration].

In April 2012, police officers were involved in a case involving thugs damaging a grocery store owned by Shiites. The scene was recorded by the store’s security camera, but it did not lead to an investigation, even though the faces of the police officers were clearly identifiable in the video.

This situation will not change until Bahrain has effective institutions and most notably an independent judicial system. To achieve that would require genuine democratic reform, and that is still a far-off dream."

The organisation Human Rights Watch issued a report last May denouncing impunity and judicial bias in the kingdom. "In Bahrain, a police officer who kills a protester in cold blood or beats a detainee to death might face a sentence of six months or maybe two years, while peacefully calling for the country to become a republic will get you life in prison,” the report states.

Bahrain is a Shiite-majority country (about 75 percent of the population), ruled by an exclusively Sunni monarchy and government. Since February 2011, members of the Shiite community who feel discriminated against regularly go into the streets in protest. In May, the International Federation for Human Rights estimated that at least 89 people had been killed since the start of the protests.