cancel confirm NSFW Votes: (0 votes)
Are you the publisher? Claim or contact us about this channel.
0
Showing article 482 of 1658 in channel 13302667
Channel Details:
Viewing all articles
Browse latest Browse all 1658
0
0

Americans for Democracy & Human Rights in Bahrain (ADHRB), the Bahrain Center for Human Rights (BCHR) and the Bahrain Institute for Rights and Democracy (BIRD) condemn the arbitrarily revocation of citizenship of three Bahraini individuals.

On 20 November 2014, an Upper Criminal Court judge in Bahrain revoked the nationalities of three Bahraini individuals, Mohammed Abdulameer (24), Ahmed Yousif (24) and Salman Isa (30), and sentenced them to 10 years imprisonment on charges of detonating explosives in the village of Eker. The decision from the court has left these individuals stateless in contravention of Article 15 of the Universal Declaration on Human Rights that protect the rights for individuals to hold a nationality. Mohammed Abdulameer is currently the only one out of the three being detained at the moment. The defendants have been sentenced in connection with an explosion that took place in the village of Eker on 14 August 2013. Mr. Abdulameer’s family was only made aware of new charges against him on Tuesday 18 November 2014. He was then immediately taken to court without the presence of his lawyer. When Mr. Abdulameer was first arrested in August of 2013, BCHR had reported that he was severely beaten and tortured until he agreed to sign a confession. .

Since protests began in 2011 the revocation of citizenship has been repeatedly used against individuals in Bahrain. A total of 52 Bahrainis have been stripped of their nationalities for crimes deemed to “threaten national security.” Most of these individuals did not receive a fair trial under international standards. In 2012, 31 Bahraini nationals were stripped of their nationality without due process for allegedly damaging state security. The list included lawyers, activists and former MPs, many whom were left stateless. They were not given any opportunities to appeal at the time as their names were removed from Bahrain’s legal registry. Following international pressure, the government allowed them to appeal several months later. Unfortunately, they no longer hold legal status within the country. As a result, these individuals are unable to receive adequate health care benefits, invoke their power of attorney or seek employment without an official sponsor. In October 2014, a Bahraini court ordered the deportation of 10 of those same individuals for violating asylum and immigration laws.

Moreover, in July 2013, Bahrain’s anti-terrorism laws were amended to include provisions for the revocation of individual’s nationality. These changes came after the King acceptedrecommendations from Bahrain’s National Assembly. These recommendations included, limiting the recognition of human rights in the country, provisions to revoke citizenships, more extreme sentencing requirements for individuals convicted under the anti-terrorism laws and the banning of protests.

In August 2014, Bahrain revoked the nationalities of another 9 out of 14 individuals convicted in a widely criticized case for “having ties to Iran.” The lawyer involved in the case claimed that some of his clients alleged that they were tortured. Another 9 citizens lost their nationality in September 2014, convicted for allegedly “smuggling arms” into the country. Human Rights Watch (HRW) has condemned the justice system of Bahrain in a 2014 report as unfair and failing to deliver basic accountability and justice. Joe Stork, Deputy Middle East Director at HRW stated, “Bahrain’s problem is not a dysfunctional justice system, but rather a highly functional injustice system.”  In July of this year, Bahrain further amended its nationality laws giving the Ministry of Interior power to revoke the nationalities of those who break their “duty of loyalty” to Bahrain. Under the provisions, the Minister of Interior can also revoke the nationality of citizens who have gained a second nationality elsewhere and any naturalized person who resides outside of the country for more than five years.

The United Nations Refugee Agency has recently launched a worldwide campaign called “I belong” to combat statelessness.  In an open letter signed by High Commissioners, Presidents, Nobel Peace laureates and human rights defenders, the agency stated, “Statelessness is inhuman. We believe it is time to end this injustice."

ADHRB, BCHR and BIRD call on the Government of Bahrain to:

We urge the United Nations Refugee Agency to intervene as a matter of urgency to prevent more nationals of Bahrain from being made stateless. 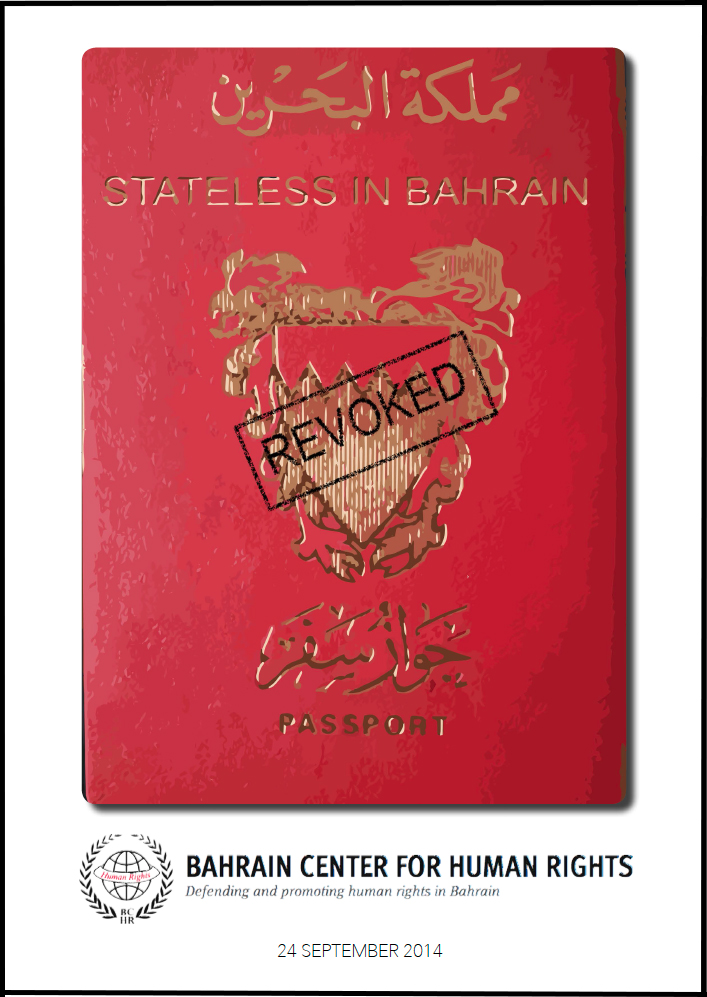