cancel confirm NSFW Votes: (0 votes)
Are you the publisher? Claim or contact us about this channel.
0
Showing article 503 of 1658 in channel 13302667
Channel Details:
Viewing all articles
Browse latest Browse all 1658
0
0

The Bahrain Centre for Human Rights condemn the repressive policies used by the Bahraini authorities against human rights defenders and other peaceful activists[1]. The authorities, represented in this case by the Ministry of Social Development, recently moved forward with new criminal charges against the activist and blogger Nader AbdelImam[2], because of his role in founding and working with the human rights organisation “Ensaf” without prior permission.

Nader AbdelImam is a Bahraini activist and blogger currently serving a six-month prison sentence since 27 August 2014 on charges of insulting religious figures in a post he published on his Twitter account. His lawyer reports that he is facing a further charge, for founding the organisation “Ensaf” and operating without a licence. The levelling of this charge is a clear violation of the principles of human rights, especially those relating to freedom of expression, peaceful work and establishing organisations.

The Bahrain Centre for Human believe Nader AbdelImam is being targeted because of his high-profile human rights activism online and on his blog. The purpose of this campaign is to prevent him from exercising his legal rights. AbdulImam’s current detention is not the first time he has been targeted – he was previously injured by a direct shot to the face during a peaceful demonstration in the capital Manama. Ensaf is an organisation founded with the aim of combating discrimination and documenting all violations relating to it using data and statistics, drawn from certified studies. Additionally, the organisation aims to strengthen the principle of balancing rights and duties for all citizens[3]. 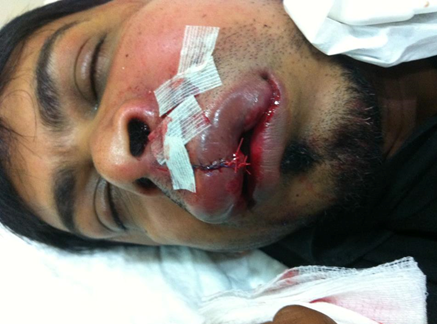 Nor is this the first time that authorities have violated the law in this way in order to silence opposition voices; they recently arrested the head of Bahrain Centre for Human Rights, the prominent human rights defender Nabeel Rajab, after he criticised security institutions in a tweet. The Bahrain Centre for Human Rights believes that the targeting of Nader AbdelImam and other human rights activists is a clear sign that the authorities are failing to comply with the international pacts and conventions to which Bahrain is a signatory.

Based on the above, the Bahrain Centre for Human Rights calls on the United States, the United Kingdom and the United Nations, as well as other relevant international organisations and human rights groups to put pressure on the Bahraini government to: