cancel confirm NSFW Votes: (0 votes)
Are you the publisher? Claim or contact us about this channel.
0
Showing article 60 of 1658 in channel 13302667
Channel Details:
Viewing all articles
Browse latest Browse all 1658
0
0

The Bahrain Center for Human Rights (BCHR) is gravely concerned in regards to the ongoing arbitrary and violent arrest campaigns carried out by the Bahraini authorities without an arrest warrant or legal basis. The BCHR is especially concerned about the use of torture and threats as a policy to extract confessions which is in most cases followed by the denial of adequate treatment during imprisonment despite in some cases presented medical reports.

On July 23, 2013 Ali Mansoor Ahmed AlQassab, who is 18 years old and suffering from a severe form of the sickle cell disease, was reportedly brutally arrested after masked men in civilian clothing accompanied by security forces raided his house while he was there alone. According to the family, he stayed at home alone and did not to join the family outing because he was tired as he had just returned back from Hamad Town Hospital.  He tried to escape when he heard unusual movements outside the house but they soon broke the front door, handcuffed and blindfolded him, searched the house, tore pictures of political leaders, and then took him in a car. AlQassab was taken to the public prosecution without a lawyer, and given 45 days in detention pending investigation on charges related to illegal gathering, rioting, and attacking the Karzakkan municipality. 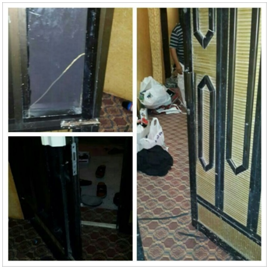 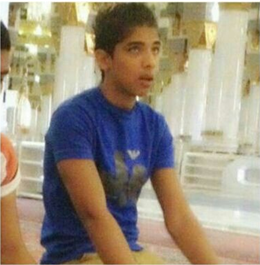 On July 24, 2013 the father received a call from Ali but the line was cut after few seconds. The following day, Thursday July 25, 2013 Ali called his family again from the Dry Docks prison and informed them that he was taken to the Public Prosecution without a lawyer and was forced to confess. He also informed them that

“the public prosecutor threatened him that if he does not confess, he will be taken back to the Central Investigations Building where he was forced to stand for 24 hours, was beaten all over his body with kicking and punching, and one of the officers beat him with a flat wooden stick on his genital area several times”.

AlQassab said that he asked about several individuals whom he does not know.  Before ending the call, he asked his family to bring him clothes and medicine and informed them that he is detained at the Dry Docks Prison Block 3.

Photos taken from the hospital

The family went to hospital despite what they were told by the policeman, and headed to the sickle cell ward where they were able to see him. At first the policeman informed them that visits are not allowed, but they were able to stay for a while and took some pictures of him. AlQassab informed his mother during their visit that he suffers from pain in his foot, back, and chest. According to his medical reports, as a result of suffering from a severe form of the sickle cell disease, he has avascular necrosis of the right hip joint which is bone erosions due to the Sickle Cell Disease vascular occlusions. This has caused a permanent disability so he uses a walking stick. His medical reports also indicate that he is consistently admitted to the hospital due to severe pain in various parts of his body. 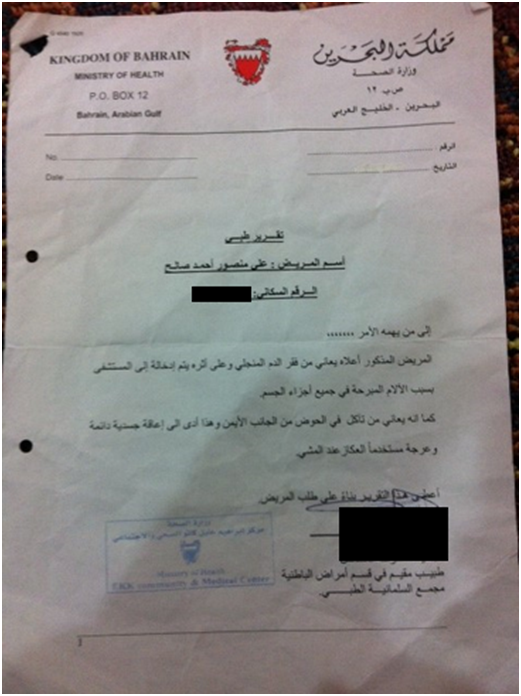 The Bahrain Center for Human Rights (BCHR) is concerned that AlQassab’s health condition will deteriorate as a result of the prison treatment and conditions, and that he will not be provided with the necessary adequate medical treatment given the systematic policy of denying political prisoners adequate medical care. More importantly, given AlQassab’s documented medical condition with his hip joint affected with avascular necrosis it would be very difficult for him to participate in clashes or rioting activities that require physical exertion on his hip joints.

This is not the first time that BCHR has documented a case in which sickle cell patients are subjected to violent arrests as the Center has recently released a new report on the issue of sickle cell disease in Bahrain, and the government crackdown on the provision of healthcare. Link to the report: http://bahrainrights.hopto.org/sites/default/files/field/image/Sickle%20Cell.pdf

Based on the above, the BCHR calls for the following: