cancel confirm NSFW Votes: (0 votes)
Are you the publisher? Claim or contact us about this channel.
0
Showing article 624 of 1658 in channel 13302667
Channel Details:
Viewing all articles
Browse latest Browse all 1658
0
0

10 July 2015 – The European Parliament yesterday passed an Urgency Resolution calling for an EU-wide ban on tear gas and crowd control equipment to Bahrain and for the immediate release of Nabeel Rajab and other prisoners of conscience, in a move welcomed by the Bahrain Institute for Rights and Democracy (BIRD), Bahrain Center for Human Rights (BCHR), and Americans for Democracy & Human Rights in Bahrain (ADHRB).

The Urgency Resolution “on Bahrain, in particular the case of Nabeel Rajab”, calls for the immediate and unconditional release of Nabeel Rajab, President of the BCHR, and other imprisoned rights defenders and political activists, including Abdulhadi Al-Khawaja, Sheikh Ali Salman, Naji Fateel, Sheikh Mohammad Habib Al-Muqdad, and Dr. Abduljalil Al-Singace. It also criticises Bahrain’s failure to implement key recommendations of the Bahrain Independent Commission of Inquiry and the Universal Period Review.

“Nabeel is being punished for speaking to the world,” said Said Yousif Almuhafda, Vice-President of BCHR. “He has been harassed ever since his return from his trip to Europe last year, when he met with the European Union in Brussels.”

In a key recommendation, the resolution calls for an EU ban on tear gas and crowd control equipment exports to Bahrain, until investigations into their improper use are conducted and perpetrators of excessive force are held accountable.

“Human rights abuses continue on a massive scale,” said Husain Abdulla, Executive Director of ADHRB. “It is heartening to see the EU recognise this, especially at a time when the United States has decided to rekindle its ‘security’ relationship with Bahrain through renewed arms sales.”

The passing of the Urgency Resolution follows major security developments between Bahrain and its international allies. In late June, the United States announced that it is lifting the four-year ban on military sales to the Bahrain Defense Force and National Guard that was first instituted following the violent suppression of protests in 2011. Earlier in June, the United Kingdom also finalised its plans for its new Bahrain naval base, the construction of which is expected to begin later this summer.

“As the European Parliament sends a message against Bahrain’s rights violations, the British government should be ashamed of its base being built there, which symbolises their complicity in the abuse of rights defenders and political activists,” said Sayed Ahmed Alwadaei, Director of Advocacy at BIRD.

This is the first resolution on Bahrain to have been adopted by the current parliament, elected in April 2014, and marks continued European concern for the state of human rights in the Gulf country. It follows a February 2014 Urgency Resolution that expressed concern about the deteriorating human rights situation in Bahrain.

BIRD, BCHR and ADHRB call on the Government of Bahrain to follow the recommendations of the Urgency Resolution. In particular, and in line with its obligations to the Universal Declaration on Human Rights, the International Covenant on Civil and Political Rights and the Convention against Torture, Bahrain must immediately and unconditionally release all political prisoners, end the use of torture in prisons, repeal the law allowing the arbitrary revocation of citizenship, and re-open dialogue with the opposition to reach a peaceful, lasting political resolution. 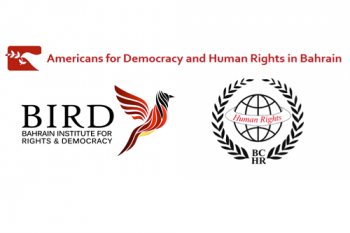