cancel confirm NSFW Votes: (0 votes)
Are you the publisher? Claim or contact us about this channel.
0
Showing article 65 of 1658 in channel 13302667
Channel Details:
Viewing all articles
Browse latest Browse all 1658
0
0

The Bahrain Center for Human Rights (BCHR) is gravely concerned over the ongoing arbitrary arrests of citizens in Bahrain regardless of their health condition, and especially in regards to the reckless driving of the policemen which has caused in the most recent case to the death of a detained mentally challenged Bahraini while being transferred by a military vehicle from a police station to an unknown place. 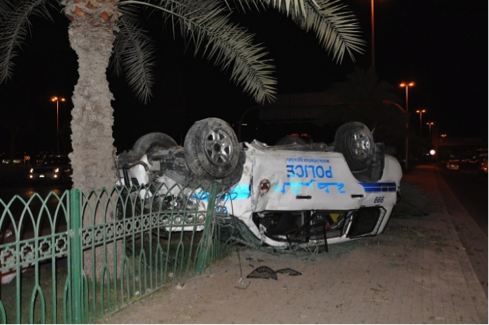 Picture of the accident published by the Ministry of Interior

Hussain Mansoor Abdulla Kadhem, 33 years old and mentally challenged, was killed yesterday, Monday July 29th, 2013 due to the injuries caused from an accident that occurred because of a police officer’s reckless driving. According to the family, Hussain Kadhem went the morning of that day to Isa Town Police Station to report that his mobile telephone was stolen when police informed him that there is a case against him at the Samaheej Police Station; where he was then transferred. The case referred to was Hussain Kadhem had been charged with “misuse of his mobile phone” and was sentenced in absentia to one month imprisonment and a bail of 500 BHD to halt the execution of the sentence which he did not pay. 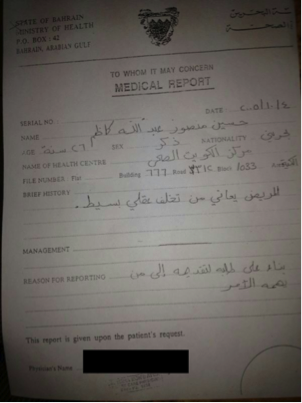 Kadhem’s brother went to the Samaheej police station where he presented the police with medical documentation of Kadhem’s mental condition; and was able to see him. The police told the brother that that they will notify him after they receive the decision of the officer in charge. In the evening, on the same day, news has spread about Hussain’s death due to a police vehicle accident while being transferred to an unknown place. The Ministry of Interior (MoI) published a statement about the death of a “passenger” and the injury of two policemen following the deterioration of a police vehicle that belongs to the Ministry of Interior. According to the MoI statement, the accident occurred around 6:30 pm while the vehicle was driving on Al Fateh road heading to Muharraq area. The MoI stated that because of the roadwork construction, the lack of care and attention of the driver, and because he was driving over the speed limit, the driver was surprised when he saw the warning signs on the road when he swerved to attempt to avoid hitting them and hit the pavement instead, leading to the deterioration of the vehicle. Link to the full statement: http://www.policemc.gov.bh/en/news_details.aspx?type=1&articleId=19326

Following the news, the brother contacted the Samaheej Police Station again and they informed him to go to Salmaniya Hospital to Kadhem. When the brother went to the hospital at first, they denied his presence, but later he was able to see his dead body at the morgue of the hospital. The police only allowed him to see the head injury but not to inspect the rest of the body. The family put out a public statement that they hold the authorities fully responsibility for the death of their son, and that they have filed a complaint against the Ministry of Interior, and demands a credible investigation into the whole incident. They also demanded that there be an investigation into whether or not their son had been subjected to any kind of ill-treatment and/or torture while being held at the police station. This is due to the fact that there have been numerous credible complaints in the past about the torture and ill-treatment prisoners get subjected to at the Samaheej Police Station.

The Bahrain Center for Human Rights believes that the reckless driving of the police officer is a result of the culture of impunity that allows officers to freely act outside the boundaries of the law. An example is the case of Ali AlBadah, a 16-year-old who died after he was run-over by a police vehicle during a protest in the Juffair area in 2011; to this day, no one has been held accountable for his death. Numerous videos continue to emerge online showing police officers driving over the speed limit on an almost daily basis. The BCHR fears that continuing to allow police officers to freely breach the driving laws, without being held accountable, will lead to further deaths, injuries, and accidents which will affect the lives of innocent civilians. The government has sent a clear message following the political uprising in Bahrain in February 2011, police officers have been increasingly violating the driving laws and endangering their lives and the lives of others even when driving in normal conditions as if they are above the law. The Prime Minister supported such reckless behavior when he thanked a police officer who was recently acquitted on torture charges (see: http://www.bahrainrights.org/en/node/6219).

In the following video link, the police officer is clearly speeding and acting irresponsibly while driving:

Based on the above, the Bahrain Center for Human Rights calls for the following: