cancel confirm NSFW Votes: (0 votes)
Are you the publisher? Claim or contact us about this channel.
0
Showing article 731 of 1658 in channel 13302667
Channel Details:
Viewing all articles
Browse latest Browse all 1658
0
0

BCHR held a side event on the occasion of the HRC31, focusing on the recent government moves to restrict freedom of expression and peaceful assembly in Bahrain.

Dr. Taha al Durazi, BHRO, explained that the rhetoric of the Bahraini government is focused on equaling political prisoners in Bahrain to criminals, when, in reality, they are only using their freedom of expression and association.

Dr al Durazi also remarked that the date 16 March represents a sad day for Bahrain, for it marks the day when medic personnel was arrested and taken to jail to be tortured.

Anna Hagberg discussed the role of women in the fight for freedom of speech and assembly and explained that the situation in Bahrain has escalated in recent years.

She mentioned the cases of Dr. Rula Al-Saffar, who was subjected to severe torture only for having treated injured peaceful protestors; Ayat al-Gormezi who was arrested and severely tortured after having read a poem that was considered to be offensive to the King.

Mrs. Hagberg also reported that Zainab al-Khawaja was arrested two days ago and taken to prison with her one year-old baby son. Zainab Al-Khawaja is still in prison today. Another case she explained is that of Jalila al-Salman, who was tortured and sentenced to 3 years for her activities in the 2011 uprising.

Due to his travel ban, Sheikh Maytham al-Salman could only make an appearance at the event through videoconference. During it, he discussed the restrictions on freedom of expression and censorship in Bahrain and the lack of reforms in such areas. The Bahraini authorities have arrested and detained many people with the article 165 of the criminal penal code as legal basis. This article fails to protect the freedom of expression and violates article 19 of the ICCPR. Sheikh Maytham Al-Salman explained to the attendees the necessity to modify said article of the Bahraini criminal penal code.

Claire Mahon, from Global Human Rights, started by exposing her expertise on UN mechanisms and how to use them to push issues such as the one on Bahrain. Later she also explained the different UN procedures and how to make use of them.

Michael Payne, Adhrb, explained the need for international redress on Bahrain. Its national institutions are supposed to defend human rights, but have repeatedly been demonstrated as inefficient. For instance, the Ombudsmann has proved to not be both government-dependant and inefficient in his task. The serious lack of independence of such institutions needs to be addressed at the international level; they need to be reformed.

Nedhal Al-Salman, BCHR, was the last panelist to take the floor. She talked about the dangers faced by human rights defenders and their constant need of support. Bahrain’s promise for reform is not real, she said, there is a need for a real reforms and not promises. 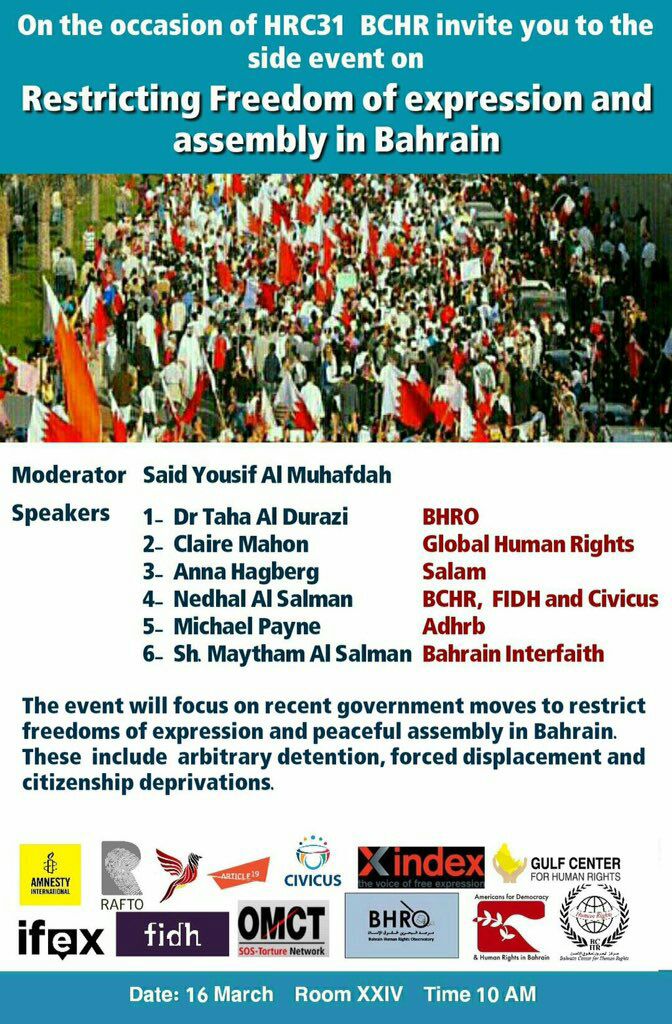