cancel confirm NSFW Votes: (0 votes)
Are you the publisher? Claim or contact us about this channel.
0
Showing article 87 of 1658 in channel 13302667
Channel Details:
Viewing all articles
Browse latest Browse all 1658
0
0

The Bahrain Center for Human Rights (BCHR) expresses its concern in regards to the ongoing campaign of distortion and sectarian incitement through official media, as the Bahraini government embarks on harsher sanctions against the right to free expression, while allowing sectarian and seditious journalists and others to continue their attacks in the media without accountability or questioning.

AlWatan Daily Newspaper - one of the local newspapers which was part of the Bandargate scandal - published an article on the morning of Saturday August 11, 2013 by one of the writers entitled "Custodian of the Two Holy Mosques, announce it so the glory of the nation return" referring to King Abdullah bin AbdulAziz, King of Saudi Arabia. In the details of the Article is an invitation by the writer "Najat AlMadhhaki" for a fast Saudi decision to the annexation of Bahrain to Saudi Arabia under the name of Gulf Union using the pretext of Iran’s targeting of Bahrain. The writer also spoke about the complicity of the United States of America and the Republic of Iran to divide and fragment Bahrain. This writer described the Shiite community as the descendants of Zoroastrians (people who pray to more than one God, in Arabic “Majoos” a derogatory and sectarian term used against Shiaa in Bahrain systematically especially by security forces) and considered them inferior of the masters of the nation: Al-Khalifa and Al-Saud. Link to the full article: http://www.alwatannews.net/ArticleViewer.aspx?ID=f1adsemBpAknhDsgaHXt4A933339933339

It is important to note that Saudi Arabia stood against Bahrain's peaceful pro-democracy mass protests since they began on February 14, 2011 under the fear of the transmission of the impact of the revolution to Saudi Arabia and the threat to the rule of AlSaud. The mainly Saudi intervention in Bahrain came in the form of heavy military support in the guise of the Gulf Cooperation Councils “Peninsula Shield”, and the Bahrain Center for Human Rights (BCHR) documented at that time testimonies of victims who confirmed the participation of Saudi forces in the attack on Sitra and in suppressing the peaceful sit-in at Pearl Roundabout. While the Bahraini regime stressed that the GCC troops were present in Bahrain to protect vital areas, a German newspaper, Der Spiegel, published on Monday, February 13th, 2012 an interview conducted with the ruler of Bahrain, Hamad bin Isa Al Khalifa, in which he stated that "we invited the GCC troops to come in to protect our strategic installations in case Iran became more aggressive." Link to the whole interview: http://www.spiegel.de/international/world/spiegel-interview-with-the-king-of-bahrain-arab-spring-that-s-the-business-of-other-countries-a-814915.html

The Minister of Information, Sameera Rajab, also confirmed in June 2013 that the Gulf Union is imperative to strengthen the capacity of the countries of the Cooperation Council for Arab States of the Gulf to protect its security and stability, and to enhance the gains and achievements in the areas of economic and social development. Source: http://www.alwasatnews.com/3940/news/read/786812/1.html

The sectarian incitements against the Shia majority in Bahrain have continued since the pro-democracy mass protests started on February 14, 2011 through social networking sites and state media. It has been the case that if the person inciting violence is pro-ruling family or of their security forces, they are not held accountable. One notable example was at Arad during which former MP Mohammed Khaled emphasized that the Bahrain state is "Arab" and will never be an easy prey to for the Safavid (another derogatory term meant to align all Shia’s in Bahrain with Iran) followers, and threatened an escalation against what he called the Iranian American danger to Bahrain. (Link to the video: http://www.youtube.com/watch?v=B5eoCxlYyuE). Khaled also tweeted on his official Twitter account "it is allowed to tie up any road blocker with chains and to pour oil on his hair, and every honest citizen who passes by him, should either run him over or throw garbage at him. I’m serious, and I will be the first (to do it)". Mohammed Khalid then deleted the tweet after criticism by activists about him inciting violence.

Another tweet recently said: "Teargas will not help with the terrorist Iran slaves who want to kill security men  ... Shotgun, live bullets and deportation is the medicine they deserve" which is a clear and explicit incitement against the opponents of the Bahraini regime policy. Link to the Tweet: https://twitter.com/boammar/status/366258084550688772 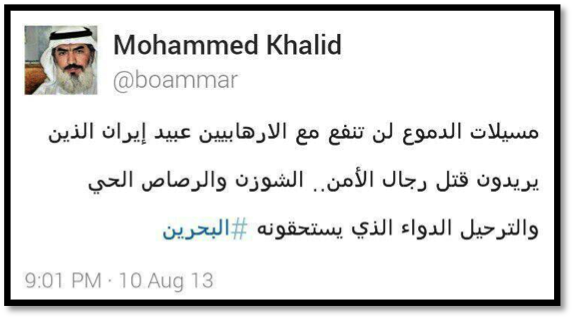 In a move which was supported by the government and particularly from Prime Minister Khalifa bin Salman Al Khalifa for toughening sanctions against peaceful demonstrators, the Bahrain News Agency (BNA) has issued a report in which it confirmed the words of the minister, "The current phase experienced by Bahrain is the stage of the rule of law and the seek to its entrenchment, in order to save the nation and the interests of the citizen". He added: “This island will burn to a cinder all those who seek to tamper with its security and stability,” The Prime Minister has emphasized that his government will confront in order to impose security and civil peace – as he alleges - any lawlessness or compromising the security of the citizens or any damage to public and private interests, and will work to bridge any gaps that incite terrorism and supports and funds it. Link to the full statement: http://www.shorouknews.com/news/view.aspx?cdate=04082013&id=a369c65f-1fb1-4f1b-aa0d-e6638df46233

In a violation of the freedom of opinion and expression, the security forces arrested a group of citizens in a case known as "Rebellion" and accused them of calling for marches with the purpose of terrorism and the spread of violence despite the fact that the statement issued by the Rebel Movement was calling explicitly for a peaceful protest and the non-confrontation with the security services in any form.

Based on the above, the Bahrain Center for Human Rights (BCHR) calls for: