cancel confirm NSFW Votes: (0 votes)
Are you the publisher? Claim or contact us about this channel.
0
Showing article 970 of 1658 in channel 13302667
Channel Details:
Viewing all articles
Browse latest Browse all 1658
0
0

Duraz is still under lockdown, with checkpoints in entrances, and only its residents allowed in.

The Bahraini authorities are still enforcing a lockdown on Duraz, which has continued for more than 100 days so far. Anyone who is not a resident of Duraz is unable to enter, and this includes clerics who intend to participate and give sermons during religious gatherings there. The authorities engaged in violent actions to forcefully remove religious signs from several areas in Bahrain.

The Bahrain Center for Human Rights (BCHR) condemns these extreme actions that were committed by the Bahraini authorities. We express our concern that these extreme acts could deprive thousands of Bahrainis of their right to freely practice their religious rituals, especially during Muharram, which is an Islamic month in which people mourn the death of the grandson of the prophet, Imam Husain ibn Ali, by engaging in many religious events.

These religious events usually take place in community centers which the Bahrainis call “Matam(s)”. Duraz has 10 Matams for men and 10 Matams for women, in which people hold at least 10 mourning sessions in total. Following the government’s decision to revoke the citizenship of the top Shia cleric in Bahrain - Sheikh Isa Qassim - and the beginning of the sit-in in front of his house, the authorities have subjected Duraz to an unprecedented lockdown, in what is a form of collective punishment against the entire village. Police established blockades closing off most of the roads leading into and out of Duraz. All major and minor entrances have been sealed off, with the exception of only two entrances to Duraz. At the two entrances left open, there are checkpoints, where policemen closely check people’s IDs, and restrict people from entering Duraz, especially non-residents. This has left people unable to participate in the biggest Friday prayer in Bahrain, which is held in Duraz, for more than 10 consecutive weeks now.

Furthermore, a number of religious Shia preachers and singers were summoned for their participation in the sit-in in front of the house of Sheikh Isa Qassim. A number of people were arrested for the same reason. Since 19 August 2016, when the first sentence was issued against Shiite cleric Sheikh Ali Humeidan, charged with gathering with intention to cause security disorder, eight other defendants, including clerics, have been sentenced a total of 12 years in prison. One of them, Habib Al-Dirazi, was sentenced to one year in prison for each day he spent in the sit-in, making it two years in total.

These violations of religious freedom occurred in many areas in Bahrain, not only in Duraz. BCHR documented the security forces’ removal of religious signs in at least 15 Shia neighbourhoods, which were put up in commemoration of Muharram. In addition, policemen used tear gas to suppress people who protested the removal of these signs. The authorities also denied entry to Duraz to at least two religious preachers; Said Mustafa Al-Karrani and Sheikh Mohammed Al-Mahfoodh, who were supposed to participate in a religious event in Duraz. Several Matam  leaders said that there are nine religious preachers who were denied entry to Bahrain on 1 October 2016, due to security reasons, despite the fact that they have visa entries that were approved by the Ministry of Interior. 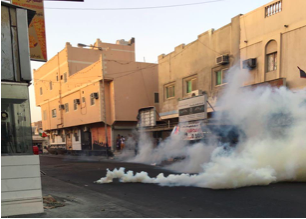 Due to these violent acts committed by the security forces in Bahrain, and the restrictions on people’s right to freedom of religion and belief, BCHR is worried that the authorities will ban all kinds of religious rituals and practices in Duraz.

A group of United Nations human rights experts* issued a statement on 16 August 1016, calling on the government of Bahrain to end the systematic harassment that the Shia population faces by the Bahraini authorities, including stripping many of them of citizenship, which they considered “deeply concerning.” They stated that: “The intensified wave of arrests, detentions, summons, interrogations and criminal charges brought against numerous Shia religious clerics and singers, human rights defenders and peaceful dissidents is having a chilling effect on fundamental human rights.” 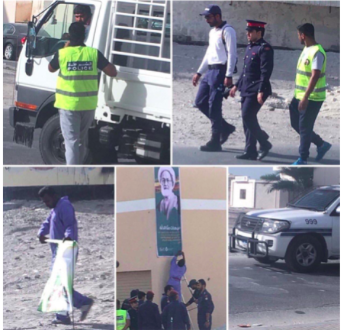 By subjecting Duraz to this siege, and attacking religious rituals, Bahrain is violating Article 18 of the International Covenant on Civil and Political Rights. Article 18 (1) states that “everyone shall have the right to freedom of thought, conscience and religion. This right shall include freedom to have or to adopt a religion or belief of his choice, and freedom, either individually or in community with others and in public or private, to manifest his religion or belief in worship, observance, practice and teaching.” These abuses also violate the rights stated in Article 18 (3), which states that “Freedom to manifest one's religion or beliefs may be subject only to such limitations as are prescribed by law and are necessary to protect public safety, order, health, or morals or the fundamental rights and freedoms of others.

In view of these violations of religious freedoms and freedom of assembly, the Bahrain Center for Human Rights calls on the Bahraini government to: