cancel confirm NSFW Votes: (0 votes)
Are you the publisher? Claim or contact us about this channel.
0
Showing article 103 of 1658 in channel 13302667
Channel Details:
Viewing all articles
Browse latest Browse all 1658
0
0

The Bahrain Center for Human Rights (BCHR) expresses its grave concern about the ongoing escalating crackdown led by the authorities in Bahrain against unarmed citizens, this time inside their homes. The regime forces attacked a family inside their home, injuring a sixteen-year-old girl with a pellet shotgun. They claimed to be chasing protesters.

The Bahrain Center for Human Rights (BCHR) documented the testimonies of the family who stated that on the afternoon of Friday, 16th August 2013, security forces attacked their home in AlKawara village after the suppression of a peaceful sit in which was announced by the 14 February Youth Coalition. The father, Mansour AlKhawaja told the BCHR that masked security forces ordered his family to go inside their home within ten seconds, and when the family were not able to do so within the time told, they attacked those inside the house. They reportedly shot of teargas inside then approached the children, (siblings who are 8, 10 and 16 years old) threatening to kill them with the pellet shotgun. They then reportedly beat the children, including Noor Mansour AlKhawaja who is 8 years old and who was injured with a rubber bullet in her leg. On their way out, they shot one round of pellets in the courtyard of the house causing the injury of Fatima Mansour AlKhawaja, 16 years old, with several pellets in the abdomen; three of which pierced her stomach, while another two settled under her skin. Security forces then surrounded the AlKhawaja home for hours and reportedly videotaped the house from the inside in continuous violation of the family’s privacy. In addition, security forces also prevented anyone from going to the house including BCHR’s Said Yousif AlMuhafdah, Head of Documentation and Acting Vice President, who went there to document the what had happened. Security forces threatened AlMuhafdhah with arrest if he did not leave.https://twitter.com/SAIDYOUSIF/status/368439948648513536 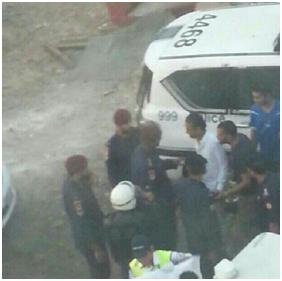 Photo of Said Yousif AlMuhafdah being ordered to leave

Minutes after the attack on Fatima, an ambulance arrived to transfer her to the hospital, but due to the continuous militarization of hospitals in Bahrain, her mother refrained from transferring her to the hospital. Hours later, security forces finally agreed to leave if the whole family went to the central police station, which they did. The father insisted on filing a complaint despite several requests from the officer at the police station that he “not make a problem”. Around midnight the family was finally allowed to leave the police station, and Fatima Alkhawaja was transferred to Salmaniya Hospital, as her health condition deteriorated and she started to vomit blood. Doctors informed the family that they discovered three pellets which penetrated the abdomen, and Fatima had to be kept in the ICU for a period of more than five hours before being transferred to the treatment ward after her condition stabilized. (https://twitter.com/SAIDYOUSIF/status/368830852953677824)

Despite Fatima Alkhawaja’s health condition, Fatima’s mother informed the BCHR that a policewoman in civilian clothes was guarding Fatima’s hospital room since the morning of Saturday, August 17. Fatima's mother has stated that the police were periodically passing by Fatima's room and that they videotaped her.

The family was surprised on Sunday's afternoon August 18, 2013 with a phone call from the Central police station asking them to bring Fatima to the Public Prosecution to interrogate her on charges of illegal gathering and insulting the king. Fatima's aunt has stated on her social media account on Twitter that the case came in retaliation of Al-Khawaja family’s refusal to drop the case filed at the police station against the security forces. In the details of the incident, Suaad AlKhawaja stated that police called the father: "… asking him to bring in his daughter who is still lying in a hospital, on the grounds that there is a complaint submitted against her by a policeman. As it seems they are trying to make a bargain with the father in order to make him waive the complaint he filed against those who assaulted his family. One of the policemen has already asked him yesterday for waiver of the complaint, citing that his daughter's health condition was stable and to avoid what he called "problems". The father has refused to waive his right to complain”. Source: https://twitter.com/SuadAK

Based on the above, the Bahrain Center for Human Rights (BCHR) calls for: