cancel confirm NSFW Votes: (0 votes)
Are you the publisher? Claim or contact us about this channel.
0
Showing article 86 of 1658 in channel 13302667
Channel Details:
Viewing all articles
Browse latest Browse all 1658
0
0

The Bahrain Center for Human Rights (BCHR) is gravely concerned in regards to the death of two civilians who were killed after reportedly being chased by police and civilian cars which led to their car crashing. On 31st of July 2013, Ali Issa Abdulridha AlBasry (25 years old) and Mahmood Abbas Salman AlAradi (19 years old) died in a horrific car crash near Sitra area.

According to the family of Mahmood AlAradi, their son has been wanted by the state security since the year 2010 in a case known as "AlHujairah" and was monitored throughout this period but was not been arrested. His home was raided on the morning of the 31st of July, but AlAradi was not there.

When the news arrived, the brother of Ali AlBasry's wife headed to the Salmaniya hospital and asked the police stationed outside about the two persons who were brought because of a car accident, they replied "yes, Mahmood AlAradi had died, and the other person died as well. Who are you?" He replied that he is a relative, after which they took him to the morgue to identify the body. He told the BCHR that when he asked the police about how they knew the name of the deceased Mahmood AlAradi as he was not carrying any Identification card, they did not answer and forced him to leave.

On the following day, the two families headed to the General Directorate of Traffic to ask about the video recording of the car crash, and they were promised that the recording would be handed over after two weeks. Then they went to a car agency located near the place of the car crash and asked if their cameras had filmed the incident. They confirmed that their cameras had filmed the accident, and that if the families had come earlier they could have received the recording, but the Ministry of Interior (MoI) had come that morning and confiscated the recording from the agency.

The relative of Ali AlBasry added that there is an eyewitness who reported that he witnessed the incident and that within minutes the area was surrounded by police and intelligence cars. He also questioned the identity of the person who spread the picture of Mahmood AlAradi after the car crash although the area was surrounded by intelligence personnel and no one was able access the scene.

Eye-witnesses told the relatives of the deceased that on the day of the incident there were four cars that were monitoring and following AlAradi and AlBasry attempting to force them to stop, but they did not. The families believe that the deceased refused to pull over because Mahmood AlAradi was wanted. 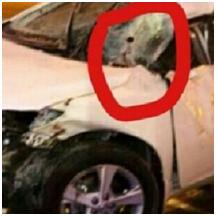 The families informed the BCHR that they believe the car crash was the result of the two young men being shot at, showing the picture of the car with an evident hole in the front glass.  They also stated that they will continue to pursue the case until they acquire the entire video recording of the incident According to the families they attempted to retrieve the car, but until the date of writing this report, the Ministry of Interior is refusing to hand it over.

On the 8th of Aug 2013, Mahmood AlAradi’s mother was stopped at the Saudi bridge on her way to Mecca, and taken to the public prosecution. Harassment of families of victims of extrajudicial killings in Bahrain is not new, especially those who choose to speak out about the killings like AlAradi’s mother.

Testimonies of the Eyewitnesses

The Bahrain Center for Human Rights (BCHR) was able to contact two eyewitnesses, below are their testimonies.

They were driving with crazy speed trying to follow the white Corolla car, and what happened is that the two police cars went ahead of the mentioned car, and someone went out from one of the black civilian cars’ windows and fired something which broke through the front glass of the car. Another person from the other black car, which was very close to the Corolla car, fired something at the front tire which exploded and the car swerved and collided into one of the big cars parked near the road, a six-wheel refrigerator truck. The four cars continued their way without stopping and went to Alba roundabout and returned again to the accident site which was surrounded in less than a minute by security and intelligence with the presence of the two civilian cars who caused the accident."

"On Wednesday 31st of July 2013 at around 5:30 pm, I was standing on the road when I noticed two black cars following a white car, which I couldn’t identify its type, and suddenly I saw the accident, but I don't know how it happened and other cars continued driving without stopping. In less than a minute while I was still standing, police and Intelligence cars surrounded the accident area and the two cars came back as well, and the car was removed as quickly as possible while preventing others from coming near the area."

A video went viral online reportedly showing the car crash. It is clear that there are two police vehicles and two civilian black as per the eyewitness. Link to the video: http://www.youtube.com/watch?v=gG1DUYrUPeg

Based on the information presented above, the Bahrain Center for Human Rights (BCHR) calls for an impartial, independent and transparent investigation into the incident, and to hold all perpetrators accountable.